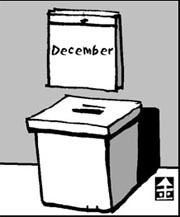 A dilemma is a situation in which you have to choose between difficult alternatives. The “Prisoner’s Dilemma,” the most famous among dilemmas, is a game theory. Two players in a critical situation tend to make the worst choice possible due to their own doubts and selfishness.
The police don’t have enough evidence for a conviction. Thus, having separated both prisoners, they offer each of them the same deal: If one testifies for the prosecution against the other and the other one remains silent, the betrayer goes free and the silent accomplice receives a 10-year sentence. If both stay silent, both prisoners are sentenced to only 1 year in jail. If each betrays the other, each receives a 5-year sentence. However, either prisoner can chooses to confess and receive five years in jail.
The prisoner’s dilemma provides the basis to explaining the development of the nuclear arms race between the United States and the Soviet Union during the Cold War. The rival military powers’ competition drove them to build more and more nuclear weapons, mainly out of mutual distrust and fear, even though they were well aware that the other country would stop building new nuclear weapons if they did.
Like the prisoner’s dilemma, the game of chicken is an important model for a diverse range of human conflicts.
The adolescent game of chicken came to the public’s attention in the 1955 movie “Rebel Without a Cause.” The game consists of two boys simultaneously driving their cars toward the edge of a cliff, jumping out at the last possible moment. The boy who jumps out first is “chicken” and loses. The only way they would not be called a loser or chicken is to die together.
The “Volunteer’s Dilemma” is a multiplayer version of the game of chicken, where volunteering is akin to swerving. If no one volunteers, the worst possible outcome is obtained. If any one person elects to volunteer, the rest benefit by not doing so.
However, I would like to mention that the dilemma facing Korean voters is one of their biggest ever, even if today marks the beginning of the month of the upcoming presidential election.
Even though there are many presidential aspirants, none seems qualified to be the next president. In addition, voters are forced to make not the second-best choice but the second-worst choice in the unclear line of battle. It even seems unclear whether each choice is the second-best or the second-worst. Confronted with the country’s worst-ever presidential race, the voters are full of doubt.