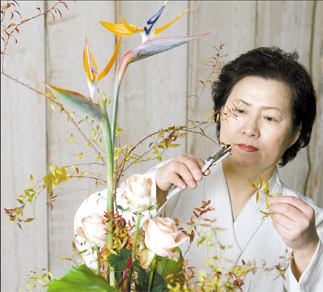 Kim Si-young thoughtfully adjusts the pale pink petals of the roses before her. She has a look of intense concentration as she makes the final adjustments to her composition.
“I wanted to create a more Oriental feel to this arrangement by using orchids instead of roses,” said Kim, former head of the Korea Floral Art Composers Association. But orchids are hard to come by these days.
Roses are more representative of Western flowers and orchids of Eastern, although these days the boundaries separating Eastern and Western flower art are very vague, she added.
“The key to traditional Korean flower arrangement lies in humility and simplicity, both in design and color. The arrangement should not be too full and the arranger should always bear in mind the beauty of space,” she said.
Kim, who was commissioned to organize flower arrangements for the 1988 Seoul Olympics, said leaves, twigs, stones, pumpkin shells and hanji, traditional Korean paper, are commonly used.
“It’s not about finding new things and making a fancy bouquet,” she said. “The objective is to make something beautiful from things that are lying around in nature, even things that others might have thrown away.”
As she worked on her arrangements in a studio in northern Seoul, Kim explained that she was using the architectural design known as the three-point arrangement in which the flowers and leaves are arranged with three main points. This technique came to the fore during the Joseon Dynasty in Korea, but it is now more commonly associated with Japanese flower arrangement.
Kim said that this is ironic because even though Japanese styles might be better known around the world, it was Korean artists that influenced their Japanese counterparts.
For example, ikebana, the Japanese art of flower arranging based on the simple alignment of leaves and twigs, as opposed to the large blooms of flowers which typify Western flower arranging styles, dates back hundreds of years on the Korean Peninsula.
“Japanese flower arrangement was influenced heavily by Korea during the Three Kingdoms Dynasty,” Kim explained.
“The Japanese succeeded in making it their own.
“It is also ironic that Asian styles heavily influenced Western flower arrangement during the Art Deco and Art Nouveau periods in the mid-20th century. But these days Koreans are mindlessly copying these Asian-influenced Western styles, and they don’t even know the history behind this strange exchange,” Kim said.
Subsequently, the identity of Korean floristry has weakened, Kim added.
To professionals like Kim, who freelances, teaches and regularly helps with the decoration of conferences and diplomatic events, this is frustrating because the art of flower arranging and floral art in paintings and murals have enjoyed a long history in Korea.
In fact, the development of Korean flower arranging reflects many of the events that have influenced Korean history.

Korean flower arrangements by artists from the Korea Floral Art Composers Association. Provided by the association

Around 2,000 years ago during the Goguryeo Kingdom, for example, murals contained floral art that was inspired by Chinese paintings. The themes ― good vs. evil, with undertones of Buddhist and Taoist philosophies ― were Chinese in origin.
During the Baekjae Kingdom (18 BCE to 660), which was one of the Three Kingdoms, Korean artists made a name for themselves and found favor with the Japanese.
Many were invited to Japan where they taught their techniques and led successful careers. Evidence of this can be seen in the use of the chilgado in Japanese floral art. The chilgado is the design of a sword used in the Baekjae period. It had a long blade and there were three short branches on its right and left. The design inspired countless floral representations in Japan.
Flower arranging in Korea took further strides during the Silla Kingdom (57 BCE- 935), the third of the Three Kingdoms, when more flowers, especially the lotus, began to get displayed in pots in the art of the day.
This shows that flowers were being cultivated more and more in homes for decoration.
However, Kim said that it wasn’t until the Goryeo Dynasty (918-1392) that a modern-day notion of the flower as something more than a wild plant began to take shape. The key factor was the spread of religion.
“People’s notion of flowers really took shape along with the development of Buddhist culture,” she said. For example, paintings of bamboo, a symbol often used by painters of Buddhist art, became popular. They were painted using Chinese ink called mukjukhwa.
Flower arrangements in celadon vases also started to appear at this time. Flowers included peonies, wild chrysanthemums, roses, gardenias and cattails, among others.
These paintings reveal two flower arranging techniques. In one, the stems of the flowers are gathered tightly in vases with small openings, and in the other the flowers are spread out almost horizontally in shorter vases with wider openings.
During the latter part of the Goryeo Dynasty (918-1392) and into the Joseon Dynasty (1392-1910), flower arrangement took another step forward with the development of tea ceremonies.
The decorative arts played a major role in the Korean tea ceremony, and as the ceremonies became more complex and intricate, so did the flower arrangements.
During the mid-Joseon Dynasty, the art of flower arranging became more systematized. A book written by Won Gwang-do in 1600 called “Byeongsa (The History of Vases)” detailed different arranging techniques.
The book was originally printed in China, but it influenced Japanese flower arranging as well.
Confucianism, a dominant ideology at that time, also proved influential. Pine trees, bamboo and in particular ume flowers, known as a symbol for Confucius scholars during this time, were often used.
Despite the similarities and shared background, there are discernible differences between Korean and Japanese flower arrangements.
“The ‘natural’ quality is also what separates Korean flower arrangements from Japanese ones,” Kim said.
Japanese arrangements tend to be more abstract and suggestive of dynamic lines, whereas Korean flower art focuses on creating harmony with the surroundings and accentuating space.
During the early 1900s when Japan occupied Korea, Korean flower arranging was dominated by Japanese styles.
“This is also ironic because originally Korea and China influenced Japanese flower art, but during [the Japanese colonial period], the Japanese style took over,” Kim explained.
After liberation from Japan in 1945, modern Korean floristry took off in women’s schools and other organizations. During the 1970s, the Korean Flower Arranging Organization and the Korea Floral Art Composers Association were set up.
According to Min Hi-ja, a professor at Suwon University’s Flower Art Department, flower arranging peaked in Korea during the 1970s and 1980s. There was a great deal of competition, more exhibitions and more substantial influences from modern art.
But since then, there have been virtually no developments or experimentation. In her book, “Traditional Korean Flower Arranging,” Min said, “Korean flower arrangement is faced with a crisis.”
It has a long way to go to capture its lost identity and distinguish its unique style, she added.
These days Kim teaches traditional Korean flower arranging, but most students want to learn Western styles because it can be learned quickly and it’s more commercial, she said. For example, when Koreans get married, they want big bouquets rather than traditional Korean floral designs.
Kim said this is regretful. “Wouldn’t it be wonderful if people bought traditional Korean flower arrangements instead of carnations for Parents’ Day?”