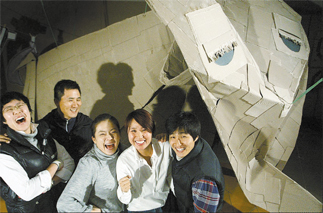 In a shabby-looking old church in Dongsung-dong, Seoul, the cast and crew of the musical “The Happy Prince” recently celebrated the completion of a grueling, five-month long set design project.
They said the show, based on the original story by the Irish writer Oscar Wilde, was hard work but ultimately a rewarding experience. In fact, they were surprised at their own success.
For the past five months, the staff came to work at 10 a.m. and worked for 12 hours a day. “Artists are not usually used to these long, confining working hours,” said the show’s director Lee Young-ran, 41. “It felt as if we were working for a regular company.”
The floor of the church was covered with elephants and pigs during the party, but not the real ones. Animal shapes were cut from writing paper, hanji, which is a traditional kind of Korean paper, and cardboard.
“This is the first-ever musical in the world, including Broadway and the West End, which uses only paper for all the set designs,” said the producer Kim Jong-hun, 40. That’s why the show has been dubbed the “paper musical.”
They made the elephant from cardboard, and a vacant, European-style hut was hand-cut from paper to replicate the texture of authentic materials used for making a real hut. An airy kind of writing paper was pieced together to make a gigantic snowman. Semi-transparent paper was used to create a light and shadow effect. To create the prince’s tears, the tip of a sheet of paper was set on fire, then extinguished, folded and wrinkled.
The team went shopping once every four days to the paper market in Bangsan Market, Jong-no, central Seoul. Two five-ton trucks delivered the items, and altogether 11 different kinds of paper were used in the production.
“For five months, we had endless epiphanies about paper,” Lee said. “I realized things about paper I never knew before.” 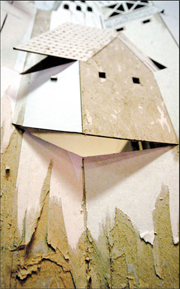 A house made with paper by “The Happy Prince” set designers.

Another noteworthy aspect of this musical is the detailed production plan, a rarity for local plays. The idea for this musical came up last October when Kim saw the Japanese production of “The Lion King.”
“I wanted to produce a creative musical which had this kind of experimental stage design,” Kim said.
A first draft of the script was completed by April. After that, the design team worked on the set.
Next June, mock productions of the play will be staged with amateur actors for two months. In October, there will be two weeks of “try-out performances” in rural areas. The Seoul debut is slated for early 2009.
“If the quality of the production is not what we had in mind, we can delay the Seoul debut,” Kim said.