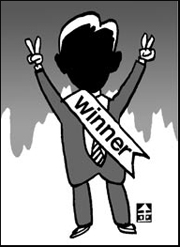 The ultimate goal of participants in an auction is to buy something at the lowest possible price. If the bidders come to a rational decision, the price of the item will be lower than expected. This is because people will not bid above a price fixed in their minds for winning, even if they really want to own what they are bidding on. Bidders are supposed to raise their bids if they put a premium on the expected returns. And the highest bidder eventually wins. That is the way an auction goes. The highest bidder wins.
However, not every participant in an auction behaves reasonably. If they have insufficient information on some item or they wrongly estimate the expected return, the bidding price has a tendency to exceed the intrinsic value of the item purchased. If one bidder wants to be the winner no matter what, he might run a bigger chance of making a mistake. Even if he wins, he may realize that he sustained a loss after due consideration.
Three researchers who studied the bidding for oil-exploration rights at the Atlantic Richfield Corporation dubbed this phenomenon the “Winner’s Curse” in 1971. In an auction, the prize goes to whoever has the most optimistic view about the value of the object being bid upon. In many cases, this also means that the winner is the person who has overestimated the most. The winner looks good, but it may be a wounded honor.
Presidential aspirants are engaged in a cutthroat competition to win the presidency. They bet their futures on the upcoming election by mobilizing all their energies. Presidential hopefuls remind us of reckless bidders who raise the bidding price up to any point to win.
As a result, the president-elect may suffer the so-called winner’s curse. President Roh Moo-hyun, who won the 2002 Presidential Election, revealed his true feelings by saying, “I cannot afford to play the role of president,” soon after his inauguration. The actual value of the presidency was overestimated. He himself realized that he had been severely damaged by the winner’s curse.
However, we also need to realize that supporters for Roh when he was a candidate suffered the most from the winner’s curse. Despite their victory in the presidential election, they had to ponder the fact that their president has fallen short of the standard for the past five years.
The presidential election is just around the corner. In the run-up, candidates will strive to win the presidency at any cost, even though the winner’s curse may wait for them at the end of the road. People are nervous at the thought that the curse may be repeated this time.