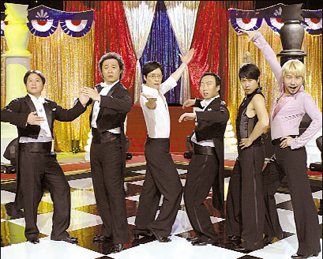 Watching one of Korea’s top comedians say “I love you forever” to Paris Hilton was certainly not what I wanted to see when I turned on the television after getting back from a dreamy trip to Japan.
But that was exactly what was on offer last Saturday on the popular show, “Muhan Dojeon (A Challenge Without Limits).”
I was already in a gloomy mood when I landed in Seoul. The autumnal leaves I saw along the streets of historic Kyoto were now replaced by unattractive banners for the presidential contenders.
And then came the final reality check: The comedian Chung Hyung-don confessing his love to the hotel heiress. Chung was only one of six guys on the show fawning over the 26-year-old, a woman born with a thick silver spoon in her mouth.
The show, shot during Hilton’s visit to Seoul last month, aired last Saturday and had created quite a buzz. It was the only major Korean TV show that Hilton agreed to appear on during her brief stay here.
Airing Saturdays at 6:40 p.m., the program usually scores an average audience rating of well over 20 percent, making it one of the most popular shows now airing in Korea.
Every week, the show’s six hosts have to complete a crazy stunt set by the show’s producers.
In one memorable episode, they had to run around the streets of Seoul dressed up in gaudy spandex as superheroes like Wonder Woman, Batman and Superman.
In another episode, wearing sharp suits and snazzy glasses, they role-played university graduates looking for work and had to undergo tough interviews with senior business executives.
One show caused some controversy. The episode put the hosts on an “uninhabited island” where they had to compete in a survival-of-the-fittest challenge. But fans of the show complained that the island wasn’t deserted in reality.
However, it didn’t matter. The show is just a silly bit of fun, the perfect Saturday treat fit for the whole family.
Their most recent project is to compete in a national dance sports competition, which is to continue for several weeks.
The beauty of the show ― what makes it such a top-rated program ― is seeing other people throw themselves into crazy challenges, unafraid of making fools of themselves. Their clumsiness in the face of daunting tasks is what makes us laugh.
The six hosts have become firm friends since the show started. They were all in the entertainment industry before, but they weren’t all household names. Now they are best known for their glib tongues and a daffy sense of humor.
Led by the popular TV comic Yoo Jae-seok, the six buddies have their own distinct spicy personalities: One’s a bit of a buffoon, one refuses to ever budge and another is always grumpy.
I’m no expert about the show, but it helps define Korean pop culture. So last Saturday I tuned in when I got home from my trip to Kyoto, hoping to ease myself back into my life in Korea.
But I have to say the show was disappointing. All I saw was the six guys challenging each other for a blind date with Hilton.
And it wasn’t as if the socialite had anything of interest to say. She barely uttered one word of note, filling up airtime with “Nice,” “I like it” and “I’m hungry.” To be honest, I don’t think the subtitles were necessary. Her vocabulary didn’t stretch much beyond what an average 10-year-old learns in English classes at school.
The rest of the show was taken up with the six hosts singing and performing infantile dances. But they just looked pathetic, not funny at all, making this Hilton special one of the top five worst episodes of this show.