[Talk of town]Stork, not stardom, pays visit to Shim

[Talk of town]Stork, not stardom, pays visit to Shim 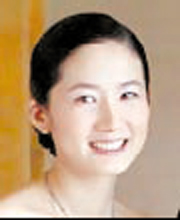 
Still making headlines despite her retirement, actress Shim Eun-ha (right) gave birth to her second daughter last Wednesday.
Shim debuted in 1993 after being recruited by MBC. She became Korea’s top actress after starring in “Art Museum by the Zoo” and “Christmas in August.” In 2001, however, she suddenly quit acting, simply stating a desire for an ordinary life as a housewife. She married Ji Sang-wook in 2005 and hasn’t appeared onscreen since.
Recently, Ji’s work as a staffer for independent presidential candidate Lee Hoi-chang sparked rumors that Shim would reappear in the media as an influential politician’s wife.
But all rumors seem to be for naught, as Ji recently said he won’t take any political positions if Lee wins the election.
Ji is the only child of Ji Sung-han, chairman of Hansung Industrial. He has shown special loyalty to Lee. He followed Lee to the United States after the politician lost the 2002 presidential election and worked for him for several years. Lee has in turn publicly supported Ji. The presidential candidate made an appearance at Ji’s and Shim’s wedding in 2005. By Lee Hyo-jeong