The elusive art of a Nobel Laureate

The elusive art of a Nobel Laureate

SINGAPORE ― Gao Xingjian first visited Singapore in 1988 as a young playwright to participate in the second Chinese Drama Camp. When he recently returned to the city for the opening of his art exhibition, he wasn’t just an emerging writer. He was the first Chinese winner of the Nobel Prize in Literature in 2000 for “Soul Mountain,” his complex novel about the bleak Chinese hinterland.
He was no longer a Chinese citizen, either. After his books were banned in China, Gao moved to France, becoming a political refugee. He eventually obtained French citizenship in 1998.
But most importantly, Gao was in Singapore this time as an artist.
The show at the private gallery iPreciation was his second major retrospective in Asia since his last exhibition at the Singapore Art Museum, which was titled “Gao Xingjian Experience.” His latest show put together the artist’s recent ink paintings on rice paper and included some of his largest works.
During an open dialogue session last week at several locations, Gao was surrounded by curious fans and journalists asking him to elaborate on the differences between his art and writing.
He was humble in his replies, calmly putting forward his grand visions about art. They included lines like “Art is not a tool of protest,” “Art cannot be defined,” “Art does not have any ego,” or, as mostly frequently quoted by critics, “Art begins where language fails.”
Intrigued, the audiences scribbled down notes and stayed until the artist disappeared through the back door.
Perhaps his ink paintings at the show provide a clearer sense of his philosophy of art.
In many ways, they serve as an extreme contrast to his writing.
While his novels are full of rich details and narrative layers, the imagery in his art merely draws vague references to nature. 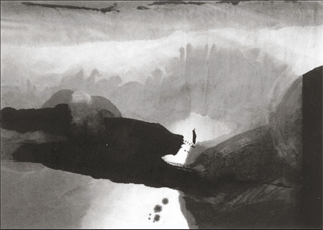 Strictly, his paintings are neither figurative nor abstract.
From a distance, a Gao painting might look like a range of mountains surrounding a giant lake. But on a closer inspection, it’s simply a bold ink stroke spreading down the paper in lighter tones of gradation. A line seems like a tree. A tiny circle over a dark background looks like a moon, a stone or the Earth.
He seems to reference certain events through suggestive titles, such as “La Maison en reve,” “La Marche nocturne” and “La Neige,” but Gao’s paintings refuse critical analysis. Instead, you are invited to meditate upon his images and form your own conclusions. They are musical, tactile and contemplative, just like his writings.
“The language of art should always be independent of itself,” explains Gao in a private interview as he sips tea during his show at iPreciation.
“It should belong to the realm of the individual without imitating language. Art shouldn’t describe the reality. A painting is just a different form of creation from writing.”
Gao started to paint in ink in 1978, shortly after his first visit to the Louvre during a trip to Paris with a group of fellow Chinese writers.
Suddenly, it hit him that he couldn’t paint in oil with the same depth and intensity as the great Western painters. He was struck by the historical tradition of Western oil paintings, a medium that was widely popular among Chinese artists at that time, himself included.
On his return to China, he abandoned oil completely and turned to ink.
“I saw an ink painting of Picasso,” Gao says. “And it was clear from his work that Picasso didn’t have a profound understanding of ink. He simply used the water and ink as ink. I wanted to find a new direction of art based on the rich tradition of Chinese ink paintings without repeating their traditions. I wanted to paint in an intuitive way that excluded language.”
But if art begins where language fails, did his writing come before painting?
“I had a dream of being a painter ever since I was 12,” he says. “Back then, my art teacher from high school recommended me to study at the Central Academy of Fine Arts in Beijing, but my mother disapproved after she saw poor artists in some movie from the 1930s. She said, ‘Whatever you do, it’s fine with me, as long as you don’t become an artist.’”
Instead, he studied French literature at Beijing Foreign Studies University and became the resident playwright for the Beijing People’s Art Theater.
In between, he shifted from writing to producing and occasionally filmmaking. Painting was still a small element of his work, at least until 1989 when Gao wrote a play called “Escape” in response to the Tiananmen Square incident in Beijing. 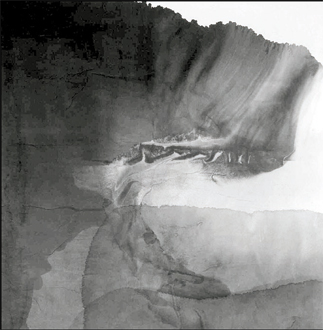 After publishing Escape, the Chinese authorities banned all his work.
During those years, he often travelled to Europe. In 1987, he was invited by the French Ministry of Culture to write plays in French. He was a guest of the Berliner Kunstler program in Germany, where he also had his first European solo exhibition, which met with great success. He eventually settled in France.
“During my life in Paris, I mostly lived off my paintings,” he recalls. “It was my main source of income. The paintings gave me the freedom to write.”
In 1986, Gao was misdiagnosed with lung cancer, and undertook a famous journey that changed his life for good. In his book “Soul Mountain,” there is a chapter in which the author anxiously waits in a doctor’s clinic for news of his diagnosis. This episode prompts the protagonist to go soul searching, seeking for the meaning of life among the remote mountains along the Yangtze River.
Gao was made a Nobel Laureate on the strength of this novel.
His odyssey also impacted on the way he depicted nature in his art. “It completely changed my understanding of color and light,” he says.
During a recent talk at the Picturehouse, a movie theater in Singapore, Gao discussed how his journey influenced his new art film “Silhouette/Shadow.”
“When you’re climbing, the clouds disperse differently. The trees look ghostly black. Even colors you dream seem to change.”
And since he undertook that journey, he says that the imagery in his paintings has followed a “false perspective.”
“It [his art] has its own depth, space and feelings,” he says. “It has an inner vision.”
We see the mountain, the sea and human figures in Gao’s art, but one thing we don’t see is politics.
Perhaps that explains the Chinese government’s relatively lenient attitude to Gao’s art. Even after they blacklisted him as a writer during the mid-1980s, they continued to let him travel abroad as a painter. His paintings were recently shown during Art Beijing, China’s major art fair. They received positive reviews.
But aside from Escape, the play he wrote in response to Tiananmen Square, Gao has never been vocal about politics in his writings, either.
His books were banned in China mostly because he discarded socialist realism for classical liberalism.
Despite the bashing that his writing received from the Chinese authorities ― they called his novel “spiritually polluted” ― Gao didn’t mention politics in his acceptance speech for the Nobel Prize at the Swedish Academy in 2000.
Instead, in a speech titled “Raison d’etre of literature,” Gao focused on the future of literature.
His principles seem to remain the same. With a gentle smile and a humble manner of speech, he evades political questions.
When asked about his interactions with other Chinese artists, Gao says he remains good friends with Zhao Wu-ji, a Chinese artist who also lives in France, and leaves it at that.
Then he adds, “The problem of Eastern versus Western doesn’t exist. I’m a native Chinese and a French national, but I am also a world traveler.”
Helena Chan, director of iPreciation and Gao’s agent in Asia, agrees with the artist’s view in many ways. “I realize that many overseas contemporary Chinese artists understand their cultural heritage better than artists who have stayed in China all their life,” says Chan, who first saw Gao’s works at his exhibition in Hong Kong in 1998. 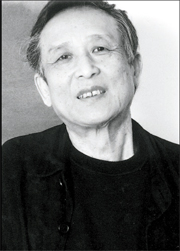 “I see many contemporary Chinese artists with great technique, but they are not able to see deeper into their heritage. Gao’s work has uniqueness in the way he presents ink. They move you. Yet it’s not just the aesthetics.”
In Europe, his paintings face other problems. People like his work, but he often runs into curators who find it hard to categorize him, which is crucial in group exhibitions.
For one show in Paris, titled “Realism Criticizes Salon,” the organizers had a debate whether Gao’s work fell into the category of realism. They eventually included him in the show. On another occasion, his work was featured in a show titled “Between Figurative and Abstract.”
On the opening night of his art exhibition in Singapore, Gao stressed his hope for the future of art.
“People say that painting is dead. But I disagree. There’s still a big area to be explored in art, especially between the abstract and figurative.”