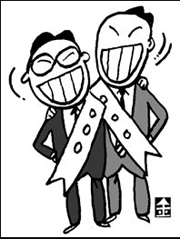 After merging, the Seoul Bank and the Korea Trust Bank were like two families under one roof. Although they agreed to use one name, the Seoul Trust Bank, and shared offices in 1976, Seoul and Trust were like oil and water. Human resource management and union activities were conducted separately, and people from the two sides did not even have lunch together. When the bank CEO was nominated from outside, the major positions within the company depended on who the CEO’s secretary supported. In hindsight, it is surprising that the Seoul Bank ― the bank changed its name again in 1995 ― could go on that way for 20 years until it was bitten hard by the financial crisis in 1997.
The case of Seoul Bank is frequently mentioned to describe the drawbacks of mergers on equal footing in the study of mergers and acquisitions. Jack Welch, the former CEO of General Electric, in his list of the seven pitfalls of M&A counts first and foremost mergers between similarly-sized companies. The legendary CEO who developed GE’s global strength through M&A and management innovation warns that when power is similar in two parties, the new company will not be able to make effective decisions, no matter who is right.
Korea, too, has recently seen the pains of equal mergers. Daerim Corporation, which owns half of Yeocheon NCC, sued the executives of Hanwha, which owns the other half of the company. Age-old antagonism between partners exploded over a minor issue. Yeocheon NCC has maintained a bizarre human resource management structure for eight years that divides major positions and promotions equally between Hanwha and Daerim. When the problem develops this far, the original purpose of the merger ― to create synergy between two companies ― has long disappeared. They can hardly manage their internal hostility.
M&As are said to be the final battles of companies. The success rate is less than 50 percent, yet companies that aggressively aim at growth still dive in. Korean companies are now taking a second look at mergers and acquisition strategies, as is shown by the example of Doosan completing a 5 trillion won ($5.4 billion) M&A in a cross-border deal.
This rule applies not just to businesses but also to many others. Two weeks ahead of the election, presidential candidates opened a large market for mergers and acquisitions. They want to find the best strategy for a merged candidacy to reap the synergy effects. Candidates or, if they are too busy, their staff, had better read M&A guidebooks on the matter.