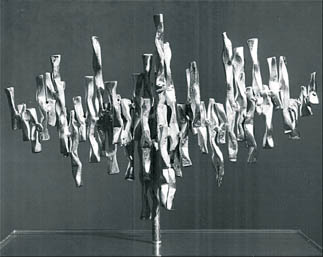 Sinisca is virtually unheard of in Korea but he’s one of Italy’s most renowned contemporary artists.
He’s a painter, a lithographer, ceramist, set designer, jewelry maker, sculptor, designer, engraver and photographer.
And 167 of his works will be on show at the Korea Foundation Cultural Center in downtown Seoul until Dec. 27.
The exhibition “Sinisca: Contamination ― Structures in the Space, 55 years of exhibitions” includes dresses that the artist designed called “Agnona.”
This is the first time audiences in Seoul have been exposed to Sinisca’s works. The Italian Embassy and the Italian Cultural Institute are sponsoring the project.
Sinisca, who was born in Naples in 1929, now bases himself in Rome, New York and Spello, a historic town in central Italy.
He started his career in 1958 and after five decades, he is still active, as the exhibition suggests.
The artist tackles different art forms, according to the cultural institute.
He is known for his ability to convey a wealth of emotions, states of mind and moods through his art. He is also particularly noted for his use and notion about space in all the different media he uses. 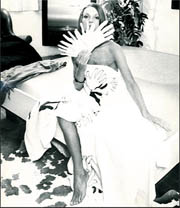 His work is considered abstract by many critics and researchers. It often features obscure lines that appear to drip down.
The photographs that the artist shot in New York and Rome look as if they are reflections within reflections.
The art critic Luce Marinetti, the daughter of the Italian poet F.T. Marinetti, has said Sinisca possesses a unique energy that gives an emotional meaning to space itself.
The exhibition features a projection of some of his more abstract works.