Ballets add Russian spirit to a hat trick of Nutcrackers

Ballets add Russian spirit to a hat trick of Nutcrackers 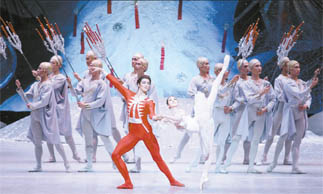 Christmas wouldn’t be Christmas without a production of “The Nutcracker.”
Tchaikovsky’s ballet is a holiday favorite, performed in many countries during the December holiday season, enchanting audiences of all ages.
This year Korean families are spoilt for choice: There are three productions to choose from.
The Korea National Ballet (www.kballet.org) will perform its version from Dec. 20 to 29 at the Seoul Arts Center. They’ve been presenting the show every year since 2000. Tickets cost 15,000 won ($16) to 70,000 won.
The Russian choreographer Yuri Grigorovich, who led the Russia Bolshoi Ballet for 33 years, has worked with the Korea National Ballet since 2005 and will direct the dancing again this year. He staged his first Nutcracker in 1966 at the Bolshoi Theatre in Moscow.
For this production, Grigorovich has rewritten the original script by the choreographer Marius Petipa, often referred to as the “father of all ballet.”
“Through Grigorovich, Korean audiences will be able to appreciate some of the traditions of Russian ballet,” said Yook Eun-jeong, PR manager of Korea National Ballet.
The Korea National Ballet will also take their show to the Gyeonggi area, Yook said.
The performance by Seoul-based Universal Ballet is lighter than the Grigorovich staging and it’s aimed at a younger audience.
They first performed The Nutcracker in 1986 and are dancing a classic version first staged by the Russian choreographer Vasily Vainonen in 1934.
Oleg Vinogradov, who has worked with the Kirov Ballet, directs.
This show runs from Dec. 8 to 30 at different venues outside of Seoul: this Saturday and Sunday at Uijeongbu Arts Center (www.uac.or.kr); Dec. 13 to 15 at Daejeon Culture and Arts Center (www.djac.or.kr); Dec. 23 to 26 at the Goyang Cultural Foundation (www.artgy.or.kr) and Dec. 29 to 30 at Gunpo Culture and Art Center (www.gunpoart.net). Showtimes vary each day and tickets cost from 10,000 won to 50,000 won.
Last but not least, Seoul Ballet Theater (www.snart.or.kr) is performing The Nutcracker at Sungnam Art Center Opera House from Dec. 21 to 25. Tickets cost from 20,000 won to 65,000 won.