Putting the fun back into sitting around

Putting the fun back into sitting around 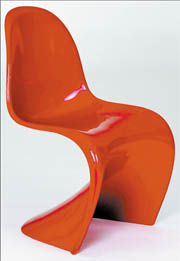 The design aesthetic of late Danish furniture/interior designer Verner Panton will be on display at a large-scale exhibition in the Seoul Arts Center’s Hangaram Design Museum from Dec. 9 to March 2.
The exhibition titled “Verner Panton ― An Exhibition of Vitra Design Museum, Weil am Rhein, Germany” is the sixth in a series of international design exhibitions by the center in celebration of its 20th anniversary.
On show will be his furniture, textiles, lamp designs and his later works from the 1990s.
Considered one of the key furniture/interior designers of the last century, Panton took industrial designs to a new level, creating more casual and modern styles using new materials and a lively color palette.
“Sitting should also be fun ― like playing ― an exciting experience,” Panton once said in an interview, revealing his witty yet functional take on innovative modern design, a subject to which he devoted six decades of his life.
He initially trained as an architect at the Royal Academy of Art in Copenhagen, Denmark. During the late 1940s, he became interested in furniture and lighting design, especially the work of Poul Henningsen and Arne Jacobsen, with whom he worked during the late 1940s and early 1950s. 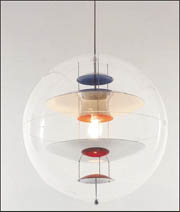 The exhibition in Korea features some of his most well-known pieces, such as the Panton Chair, Living Tower and Spiral Lampen as well as his textile designs.
The Panton Chair, a functional yet innovative bright red chair, has become a design classic, with Vitra manufacturing and retailing reproductions since 1990.
Enthusiasm for his work dwindled during his later years. But before he died in 1998, his work came back into the limelight when there was a revival in the use of plastics and 1960s-inspired interior design.

“Verner Panton ― An Exhibition of Vitra Design Museum, Weil am Rhein, Germany” runs from Dec. 9 to March 2, Monday to Sunday (except the last Monday of every month) from 11 a.m. to 7 p.m. Admission for adults is 8,000 won ($8.60) and 4,000 won for children. The Seoul Arts Center is located in Seocho-dong, southern Seoul. The nearest subway station is Nambu Bus Terminal station, line No. 3, exit 4 or 5. For more information, visit www.vernerpanton.kr