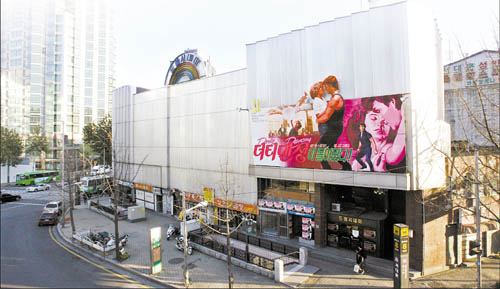 Dream Cinema, due to close early next year, is giving a special screening of “Dirty Dancing” as a farewell party. By Ahn Yoon-soo

Once upon a time Hwayang Theater was the hub for films in Seoul. Moviegoers used to line up to book tickets, and on opening nights actors waved to the crowds as they swept up the red carpet into the auditorium.
But those days have gone. Everything about cinema culture in Korea has changed since then, except for this one theater.
Moviegoers now flock to multiplex theaters filled with the sweetish aroma of popcorn. But for the single-screen theaters of yesteryear, the curtains are ready to fall.
Hwayang Theater opened in 1964, and it has not changed with the times.
In 1999, it made one concession, changing its name to Dream Cinema. But this attempt to rebrand its image failed.
Words like “desolate” and “deserted” best describe the cinema today. It plays feature films that are long past their opening dates or are about to be released on DVD.
To make matters worse, the area around Dream Cinema, located near Seodaemun subway station, has been earmarked for redevelopment, bestowing a death sentence upon the theater.
The owner, Kim Eun-joo, 30, has tried her best to revive the theater’s fading fortunes, but announced last October that it will shut down. 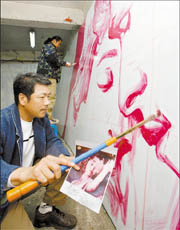 Kim Young-jun paints what might be his last film signboard.

When it does, it will bring to a close the history of old-time single-screen theaters in Seoul.
With Danseongsa and Piccadilly Theater in Jongno, central Seoul, now state-of-the-art multiplexes, Dream Cinema is the last of its kind. Kim started working at the cinema when she was in her early 20s, and she doesn’t want to see the cinema close without a grand finale. She is passionate about film and the history of old cinemas, and she wants this story to have a happy ending.
So she decided to throw a farewell party, and the highlight will be one of the cinema’s biggest box office draws, “Dirty Dancing” from 1987 starring Patrick Swayze and Jennifer Grey. It’s also one of Kim’s all-time favorites, a movie that defined her youth.
In keeping with this retro event, the theater tickets will be printed on thin, rough paper instead of the glossy card that multiplexes use, and the tickets will cost just 3,500 won ($3.70), half the price of cinema tickets today.
“I was crazy about the film ‘Dirty Dancing’ and I was sure I wouldn’t be the only one,” Kim said.
She was right. The film opened last month and her farewell party is attracting 700 to 1,000 viewers a day, several times more than the average audience at Dream Theater.
Housewife Lee Mi-sun, 48, battled the drizzle to see the film the other day, accompanied by her son, Choi Yoon-gwang, 23, on leave from the military.
When Lee heard that the cinema was screening Dirty Dancing, she wanted to take her son down memory lane and share a part of her youth with him. During the film, Lee photographed the screen and the theater with her cell phone.
“I wanted a last living image of the film and the theater,” Lee said, holding onto her son’s arm. “I’m going to keep the ticket forever, too.”
Kim, the theater owner, said Lee and her son are not alone in enjoying the Dirty Dancing treat. 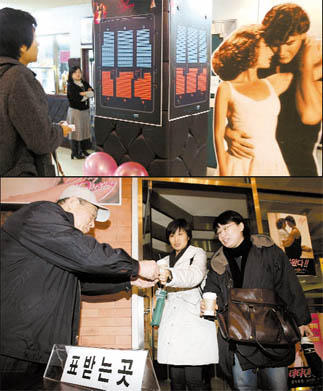 “Middle-aged cinemagoers shook my hand and thanked me,” Kim said. She quoted them as saying, “I was afraid I’d never be able to see the film on the big screen again. Thank you for giving us this one last chance.”
Kim, smiling and looking too young to be associated with such an old cinema, said, “This is the best thing I’ve ever done.”
The owner of the building is also impressed. After seeing the size of the audiences ― and hearing the tinkling of the cash register ― he’s allowing Kim to run the film into early next year, until the day the bulldozers arrive.
And that’s what Kim is planning to do. She can’t name the final date, but before that day comes, she hopes to present some other classics that have graced the screen at Dream Cinema, such as “The Sound of Music” (1965) starring Julie Andrews, and “Ben-Hur” (1959).
For now, Dream Cinema is tuned into Dirty Dancing, which is keeping theater staff on its toes.
Security guard Lee Tae-sik, 65, said he is delighted with the business the theater is doing. He’s slept at the theater for the last 12 years, maintaining the facilities, getting up at dawn to do the cleaning and taking care of ticketing as well.
“I can’t say it’s the most comfortable job in the world,” Lee said, dressed in his fading uniform. “I only ask that moviegoers enjoy the film and get back home safely.”
Dream Cinema has another long-term guardian, projectionist Lee Gil-ung, 67. Like a latter-day Alfredo from the classic Italian film “Cinema Paradiso,” Lee is a film aficionado with a career spanning six decades.
As a young man he sought out jobs related to celluloid and ended up at Dream Cinema. He welcomes visitors to peek into his office, though he’s usually busy with the projector.
Looking back on his career, he recalled how tricky the job used to be and how he could sometimes mess up the projector. “If the film stopped abruptly, the audience would have to be patient and wait for me to get things working again,” he said. 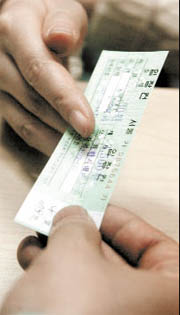 If you’ve passed the Dream Cinema recently, you’ll have noticed the giant hand-painted advertising board above the theater. Before multiplexes, theaters promoted their films with painted signs rather than the giant corporate posters that we see today.
Kim Young-jun, 51, is one of Seoul’s most experienced theater sign painters, but after three decades on the job, Kim said the Dirty Dancing painting is probably his last theater assignment.
“There are things that you can do only when you draw with your own hands,” Kim said. “Some things can never be expressed through machines and computers.”
Kim said Hong Kong actors like Chow Yun Fat, who starred in “Crouching Tiger, Hidden Dragon” (2000), and the late Leslie Cheung complimented his paintings when they visited Dream Cinema to greet Korean audiences in the 1980s.
The Dirty Dancing signboard is 24 meters (78 feet) long, and took Kim and his two assistants one week to complete.
“I didn’t put in any extra effort for the Dirty Dancing signboard,” Kim said. “I’ve always tried my best for all the signs I’ve painted.”
Still, Kim admitted that he felt the tip of his brushes shaking while painting the Dirty Dancing sign, knowing it was his last for the cinema.
Kim, equally passionate about movies and art, knows he’s part of a dying breed, but he tries to look for a silver lining. 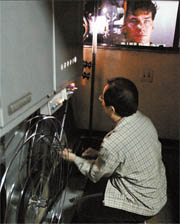 “I believe this kind of painting could be developed into a specific genre of art,” Kim said. These days, he spends hours in his studio at his home, drawing people and portraits, and he hopes to hold an exhibition one day.
In the meantime, audiences are still flocking to Dream Cinema to get one last dose of Dirty Dancing.
Kim, the owner, said, “People travel all the way from the countryside just to see this film. And the audiences are getting bigger.”
Not surprisingly, Kim is critical of the multiplexes, which she thinks has degraded the culture of going to the movies. She likens them to “going to a neighborhood supermarket wearing slippers.”
But the audiences enjoying Dirty Dancing in downtown Seoul are different. They know the culture of going to the movies is all the more precious because it’s dying out.
“What we shared will not be forgotten,” says one character in the movie.
The staff and supporters of Dream Cinema feel the same way.