Fresh faces form frame for this do

Fresh faces form frame for this do 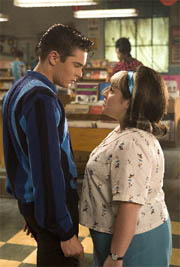 Zac Efron, left, and Nikki Blonsky open their hearts and their minds as Baltimore teenagers in “Hairspray.” Provided by New Line Cinema

Ladies and gentlemen, brace yourselves. A pandemic psychosis is spreading among the women of the world, including those in Korea. Called Efronmania, it began to infect the general public yesterday morning at the first showing of “Hairspray.” And yes, dear readers, I have fallen victim.
O.K., so in case you haven’t already figured it out, “Efronmania” is not a real disease. This is my term for the rabid adoration of young actor Zac Efron, the male lead of Hairspray who first hit it big in the Disney Channel original movie “High School Musical” in 2006.
As a young adult who grew up during the teenybopper era of bubblegum Britney (before she got nasty) and the Backstreet Boys, it was hard for me to resist the charms of Efron in the squeaky-clean, saccharine High School Musical and its recent sequel, but I did.
But in Hairspray, the new movie musical (which is also playing onstage in Seoul at Chungmu Art Hall), Efron is adorable as Link Larkin. A heartthrob who dances his way into the hearts of his audience on “The Corny Collins Show,” a fictional local spoof on “American Bandstand” for 1960s Baltimore, Link is the boy of every girl’s dreams ― especially young Tracy Turnblad.
Cinematic newcomer Nikki Blonsky takes on the role of Tracy, a girl who is average in every way, except for being plus-sized and possessing a prowess for prancing.
Problem is, Link’s heart belongs to another, the frosty Amber Von Tussle (Brittany Snow), the undeserving female star of The Corny Collins Show. But everything changes when Tracy happens to catch the eye of Link ― and Corny Collins himself ― with her flashy footwork.
Hairspray, however, isn’t all about teen romance and dancing. Once Tracy becomes one of “the nicest kids in town,” as the dancers on the show are called, she realizes the racial inequities of the show’s system. Only once a month, during the cheekily named “Negro Day,” are the black kids of Baltimore allowed to shake it down on TV. But, as Tracy says, “Every day should be Negro Day!”
Although such a moral message could come across as heavy-handed, Hairspray is just too hilarious to slip into that category. In fact, Hairspray, in many ways, could have slipped into several annoying extremes. For instance, many could have rolled their eyes at the story’s starry-eyed optimism, but it’s tempered by the rough reality of its Baltimore setting. This is best seen in the opening song, “Good Morning Baltimore,” in which Tracy gleefully dances down the street, appreciating even the rats around her feet and the flasher who lives next door.
The gray, washed-out scenery of Baltimore also contrasts nicely with the candy-colored set of The Corny Collins show. Otherwise, the audience would have come away seeing sunspots after too much exposure to such blindingly bright hues.
The cast of this version of Hairspray, however, suffers from some diluted talent. Everyone, even John Travolta in drag as Tracy’s mother, has a pretty face ― but this is a musical, and not everyone measures up to the same degree in terms of song and dance. While Efron (be still my heart!) and Blonsky were made for musicals, others were not.
Michelle Pfeiffer, who plays Velma Von Tussle, Amber’s mother and the TV station manager, handles her spoken lines like a master villainess. But there’s a reason why “Grease 2,” which also starred Pfeiffer, was a huge flop: She can’t sing.
Also, while nobody could have played Danny Zuko better than Travolta in 1978’s “Grease,” his turn as Edna Turnblad is nowhere near as strong. Despite being in a fat suit, Travolta’s voice as he attempts to sing as a woman is disappointingly thin. Considering her size, Edna should sing like a diva, not an asthmatic Danny Zuko.
But oh, to be young! The youthful stars of this musical truly save the day. Blonsky, who had scooped ice cream before winning her role as Tracy, pours her heart into her performance. Even Amanda Bynes, who would win the award for Most Annoying Young Actress Ever in my book, is surprisingly winning as Tracy’s best friend.
And of course, there’s Efron. Let’s hope that Hollywood keeps churning out more musicals to bill him as the star.