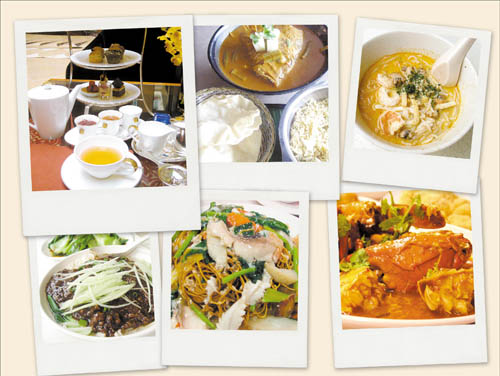 For years, I’ve been tempted to sign up for a special food tour to Singapore. That’s when local travel agents take you around on a trolley to three different restaurants every night, each for an appetizer, a main course and dessert.
But I never went. Perhaps it was my suppressed Confucian upbringing from my grandfather that taught me it was immoral to indulge so extravagantly in food, especially for a girl.
Even so, every July when the Singapore Tourism Board harassed me with press releases about its famous food festival, I was tempted again by lustful cravings for plump fresh crab drenched in a spicy chili sauce of tomatoes and eggs.
By chance, I recently found myself in Singapore, a city well known for its strict laws and good food. I was interviewing an artist who was having a major retrospective in the city.
I landed in Singapore around 9 p.m., well past dinnertime. After throwing my luggage into my hotel room, I headed to a nearby 7-Eleven.
One of the luxuries in Singapore is you can taste an endless variety of ethnic food, especially Chinese, Indian and Malay, and this holds true even for what’s on the shelves in local convenience stores.
My choice for a late-night snack was instant tham yam gung, a spicy Thai hot pot with lemon grass and seafood, by Myojo, a Japanese brand that’s widely popular in Singapore.
According to the company’s official Web site, Myojo was the first instant noodle sold in Singapore. That was in 1971.
The history is telling. Despite the excess of sodium in the savory packet, obvious from the way my tongue was burning after my meal, the soup tasted surprisingly good, similar to the original Thai dish. For dessert, I opted for black sesame flavor Japanese mochi ice-cream.
The meal was a promising warm-up for the eating ahead.
The next day, I headed for an early lunch to “Little India” on Serangoon Road, a district that neighbors the Malay enclave.
I asked my Indian taxi driver where I should go for a fish head curry, a signature dish you find in Singapore. 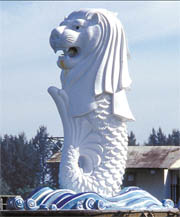 He dropped me in front of a restaurant called Muthu’s Curry on Race Course Road, known as “curry row.”
The dish is supposed to have originated in this eatery, according to staff at Muthu’s. The original owner, the late Muthu Ayyakkannu, opened a humble coffee shop one block down on Klang Road in 1969.
Apparently, Ayyakkannu stole the idea for the curry from his Chinese neighbors, who often dunked leftover fish heads in their soup.
Indian restaurants in Singapore are particularly charming, offering North and South Indian cooking under one roof. If you are familiar with the Indian cuisine scene in Korea, you’d appreciate Singapore even more.
In particular, South Indian cuisine, known for being humble and basic compared to posh North Indian food, is a rare find in Seoul.
For starters, I ordered a fish cutlet, bite-size balls of deep-fried minced fish and potato. The balls were fried to perfection, served glittering gold on the outside and hot and moist inside.
I quickly moved to the main course.
The meat around the head is the best part of every fish, a fact endorsed by most Asian cuisines, and regarded as a luxury.
Muthu’s offers chicken, mutton, prawn and squid curries as well, but when in Rome, as they say, I ordered the fish head curry, as recommended by just about every tourist guidebook.
Soon, a bowl of crispy papadums and biryani rice arrived at my table, set in a banana leaf on a tray. You pour the curry and spread rice directly onto the tray, and then eat.
The fish head curry, prepared with red snapper, is simmered in tamarind gravy South Indian-style with slices of okra, tomatoes and seasonal vegetables. The locals recommend a glass of calamansi, a local lime juice, but instead I asked for a plain lassi.
An hour later, after violently dissecting the fish head, I left a gruesome scene ― fish war, with just jaw, bones and eyes remaining.
I resisted the temptation to try the restaurant’s tandoori fish head, an adaptation of the ever-popular tandoori chicken, and moved on to my afternoon plan ― high tea.
The gallery where I was doing my interview was located inside the Fullerton Hotel. The Courtyard there is noted for its tea sets.
High tea is popular in Singapore, due to its past association with the British Empire.
The tea set, served only in The Courtyard from 2:30 to 6 pm, is impressive: various hors d’oeuvres, including finger sandwiches, creme brulee, mini scones, chocolate cake and a cup of jelly topped with cranberries, all served on a three-tier tea stand.
One of the most unusual canapes was the otah, Malay-style minced fish on bread topped with parsley and mayonnaise.
The scones are soft and slightly crumbly, served with butter and homemade strawberry jam.
One of my biggest regrets is that I didn’t get to visit the famous hawker centers, which are probably the most distinctive eateries in Singapore.
My colleague Lee Min-a, in Singapore at the same time traveling with the Blue House press corps to cover the recent Asean summit, filled me in about her hawker experience.

Lee Min-a: They hawked, and we were the delighted prey.
As soon as we took our seats at the hawker center at 11 p.m., a group of excited vendors dashed over to our table.
“Have the satay! The gong gongs are good. No, you want lala? We have laksa!”
I honestly had no idea what they were talking about, and there was no one to tell me and my companions what these dishes were called in English.
But the vendors were very enthusiastic, offering us a pitcher of beer even before we’d ordered.
So we decided to take up their recommendations, including the gong gongs and the lalas.
The hawker center is an outdoor food court under a giant canopy in Singapore, serving food from Malaysia, Hong Kong, India and China. Some even served kimchi jjigye, a Korean hot-pot.
For as little as five Singapore dollars ($3.45) per dish, you can get excellent food from the dozens of hawker centers spread throughout the city, though you should anticipate long queues at lunchtime.
“We locals don’t go to restaurants. Too expensive. Locals go to hawker centers,” a taxi driver told us, dropping us at the Newton Hawker Center.
We later learned that what we were encouraged to order was the perfect choice to go with beer at night.
The satay was sweetened lamb and chicken kebab and the gong gongs were tiny turbos, a kind of shellfish.
You use a toothpick to spear out the chewy meat from inside the shell and dip it in the chili sauce.
The lalas were clams, steamed in a sweet and sour sauce served on a banana leaf. The laksa was a spicy noodle soup that my friend had trouble eating ― but at the same time, I loved ― because of the smell of the coconut.
For those less daring when it comes to trying food with unfamiliar names, there were crispy noodles in seafood and chicken wings.
But don’t be so heartless as to turn down the hawkers. Go with the flow and order your gong gongs.
Back to my trip, on the third day of my journey, I woke up early and headed to Katong, a popular food enclave where the early Chinese communities first settled in the 17th century.
There, I had Katong laksa at a street joint famous for rice noodles in coconut curry gravy on the corner of Ceylon and East Coast, which my colleague had also enjoyed.
For less than four Singapore dollars, laksa was a power-boosting dish to start the day. It comes with tofu, fish sticks, shrimps and cockles as garnish.
The more expensive version of the same dish I had in my hotel on the last day of my stay had more exotic seafood like clams and prawns. But it didn’t taste that different considering the extra cost, nearly thirty Singapore dollars.
An unexpected dish on my trip was jajanmen, which I ate in a humble food court in Chinatown named West Lake.
I went into the food court just to escape the unbearable midday humidity. I was desperate for a noodle soup and a Chinese woman who barely spoke English stared at me and said three little words: “Minced pork gravy.”
When the dish arrived, it was like looking at jajangmyeon, the black bean noodles which is a popular Chinese dish in Korea.
On the last day of my trip, I gave in to my touristy leanings and politely asked my local friend to take me to a chili crab restaurant.
Many suggested that we go to Jumbo Seafood, which is extensively covered in local tourist magazines. Instead, we tried our luck at a place called Harvest Seafood Restaurant in the Boat Quay district.
We struck lucky. The crab was fresh and juicy, flash-fried and served in a pungent chili sauce. It was neither too spicy nor too plain. I licked my fingers dry.
But most of all, I’ve finally satisfied my lust. I can now die happy.

*An extravagant afternoon tea of creme brulee, scones and chocolate pastries at The Courtyard in the Fullerton Hotel.
*Fish head curry and biryani rice served on a banana leaf at Muthu’s Curry in the Little India district.
*A classic bowl of laksa, an inexpensive seafood noodle soup made with coconut juice.
*The original jajanmyeon, Taiwanese wheat noodles topped with a black soybean sauce, at a restaurant in Chinatown.
*Crispy noodles in seafood at a downtown hawker center.
*Chili crab in the Boat Quay district.