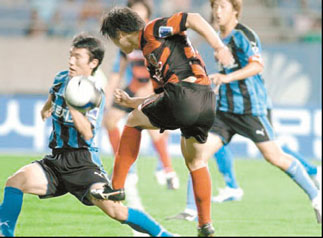 A telling scene in the documentary “Bisang (Flying)” captures the character of Incheon United Football Club.
When the players are leaving for overseas training before the start of the new K-League season, they get held up in Istanbul during a layover. The team’s marketing coordinator had bought cheap tickets to save money.
The exhausted players bum around on the airport benches, waiting nine hours for their next flight.
The scene summed up an enervated Incheon United FC, the underdog in the K-League, the national football league, until charismatic new Coach Chang Woe-ryong joined in 2005.
That year, the team, owned and supported by the citizens of Incheon, performed miracles.
They finished second in the K-League and reached the semifinals of the Korean FA Cup the following year.
Bisang started out when the original producers at Tube Pictures hired director Lim Yu-cheol to shoot a film about FC Seoul, the powerhouse of the K-League.
But a few days into filming, Lim decided there wasn’t enough human drama. The team refused to give the camera crew access to the dressing rooms or team talks before matches.
Lim turned to Incheon United FC, and by pure coincidence the team recorded its best season.
In the 2005 playoffs, Incheon lost the championship to Ulsan Hyundai, but they still won a fierce match against Busan I’Park, the former Daewoo Royals.
That team had fired many of its players and staff following the 1997 financial crisis, and many of them then joined Incheon.
In one of the DVD extras, Coach Chang said in a phone call from England about the team’s success that, “perhaps it all happened to make our story into a film.”
Incheon United FC had sent Chang to observe English football, a rare case in the Korean professional league.
There certainly was an element of luck in the team’s fortunes.
Incheon was not a strong team when it joined the K-League in 2004. It had no star players, and weeks into the K-League season in 2005, captain Im Joong-yong suffered an unusual eye condition: He kept losing sight of the ball during matches because he was so exhausted.
The documentary has some great anecdotes about sports commercialism in the Korean football industry.
Apparently, Incheon hung a banner from its stadium roof of Park Ju-young, FC Seoul’s star player, when FC Seoul visited Incheon for a pivotal game.
Even though Park was playing for the opposition, Incheon wanted to draw a big crowd.
The film also conveys the drama of the winners and losers as they strive to achieve their dreams.
Before a match between Incheon United and Busan I’Park, Kim Seok-hyun, Incheon’s secretary who was laid off by theDaewoo Royals in 1997, breaks down during an interview ― he’s desperate to beat the team that sacked him in 1997.
There’s a tinge of nostalgia, too, for sports fans in Incheon, once home to the Sammi Super Stars, the worst of the six Korean pro baseball teams. In 1982, they famously lost 65 games.
But most importantly, the film communicates the beauty of football.
In baseball, the team with the best players usually wins.
But in football, you never know what’s going to happen.
There’s always hope, right until the final whistle. And that gives us optimism for life.