Organic meds not for the squeamish

Organic meds not for the squeamish 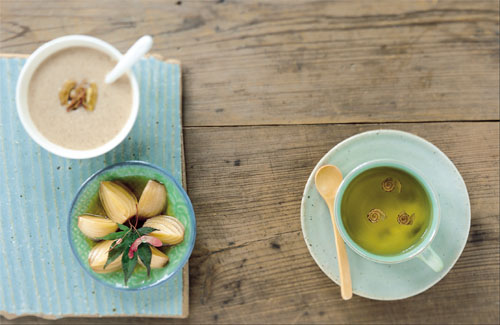 Han Sang-jun, 38, starts and ends his day with a cup of chomillan, a vinegary drink mixed with raw egg.
“It doesn’t taste good, but it sure keeps me healthy,” Han said. He reckons his home-made concoction keeps him looking young, helps with his digestion and exfoliates his skin.
His wife is also a convert. She used to suffer severe from constipation.
“Western medicine offered temporary relief, but our homemade remedy keeps my wife regular,” Han said, pointing out that you can easily pick up the ingredients at any supermarket. All you need are eggs, vinegar and honey or sugar.
First, wash a raw white egg and soak it in a sealed jar containing grain vinegar. Store for a week in a cool, dark place until the egg- shell melts into the vinegar. Then, stir in some honey and natural herbs and chill in the fridge for about three days.
Drink in one shot.
Han has been researching traditional grain vinegar for the past five years and now runs a business promoting related products. His customers suffer debilitating diseases such as liver cancer, osteoporosis or diabetes.
“They come looking for Korean traditional folk remedies as a last resort,” Han said. Folk remedies work as a complementary and alternative medicine, he explained.
Chun Dong-myung, 46, a professional herbalist at the Korean Herb Natural Science Center in Busan, believes the herbs used in these traditional Korean folk remedies can play a pivotal role in combating disease.
Growing up in a poor family, Chun learned how to forage for food from the natural world around him.
During the summer, he trapped and ate grasshoppers, dragonflies, frogs, snakes, crickets, butcherbirds, mudfish and crayfish.
After school, he walked in the hills near his home and drank juice extracted from pine trees and ate bark. He always carried salt and matches with him so he could fry up mushrooms along the way.
“It was to fight hunger and poverty,” he said.
Eating off the land like this was a matter of survival for people in the past who grew up in poverty.
According to the Association of Korean Oriental Medicine, people used to accumulate medical experience and knowledge by classifying edible and inedible plants.
They developed an instinct for what was wholesome and what was toxic, instincts that people in today’s society have largely lost.
Korean folk remedies bear some similarites with Oriental medicine, but there is a crucial difference: Oriental medicine is a formalized area of study with principles and rules, whereas traditional folk remedies follow an oral tradition and are based on instinct and experience. There’s virtually no knowledge written down, and herbalists rarely consult books.
Many such folk remedies are still practiced today.
For example, it’s said that a bowl of soybean soup with garlic, onion and spring onion treats colds; castor oil helps constipation; reed roots prevent nosebleeds; persimmon leaf tea cures anemia; warts, corns and some eye ailments can be cured by rubbing them with the eye of an Alaskan pollack; azalea wine controls high blood pressure; and wild rose mushroom tea beats a hangover into submission.
But some Oriental medical doctors, like Kim Hyun-soo of Dailim, an Oriental medicine hospital in Incheon, insist many of these remedies are ineffective, and some are downright dangerous.
They are rarely validated by research other than anecdotal evidence. What works for one person doesn’t necessarily work for another, since an individual’s metabolism and temperament are important variables, he said.
For example, applying soybean paste mixed with soju (a popular Korean spirit) to burns is not a good idea, Kim said.
“The traditional belief is that alcohol draws heat from the body, but the effect is actually the opposite,” he said.
Kim said anyone with third-degree burns must seek medical advice from qualified practitioners and not resort to dousing their wounds with alcohol.
That said, minor burns can be treated at home with an infusion of saltwater, radish juice, buckwheat flour, cucumber or egg and glycerin. Doenjang (soybean paste) is good for bee stings because it neutralizes the acidity of the poison, Kim said.
But he dismisses other remedies such as the belief that drinking soju mixed with red pepper helps relieve colds.
“Such a drink makes you sweat, but it doesn’t get rid of the cold,” Kim said.
Ginger and papaya teas are a better option, he said.
Other traditional Korean folk remedies from the past have nearly all died out, and in some cases, that’s not such a bad thing.

For instance, people used to think that you could treat arthritis by consuming eight to 20 grams of cattle kneebone soup boiled in six cups of water for two hours. The drink was supposed to soothe joint inflammation and induce blood circulation.
And crushed centipedes used to be made into a popular health drink. People would chop off the centipede’s head and feet, grind the body into a powder and add an egg.
Drunk twice every day on an empty stomach, this centipede cocktail was thought to prevent germs from spreading.
There was also widespread belief that a collapsed drunk could be revived by rubbing him or her with a tofu or soybean paste; that radish and pumpkin juice counteracted the effect of chemicals used in farming on the human body; and that cat’s urine poured into the ear helped extract trapped insects.
Washing your feet in the juice from boiled carrots prevented smelly feet, and a mixture of papaya, apricot and lard prevented wrinkles.
Needless to say, some people harbor doubts about some folk remedies.
Kang Gun-il, a former professor of Sookmyung Women’s University, is skeptical and said few people in the past realize just how ineffective and potentially dangerous these treatments were, he said.
Kang is also concerned that some of these remedies are enjoying something of a renaissance.
“Korea is seeing an unprecedented boom in acupuncture and herbal remedies, but people aren’t really really thinking properly about whether these remedies are really going to work,” Kang wrote last year in his book, “A Korean Skeptic’s Report: New Age-Occupied Territory.”
But Chun, the herbs researcher, disagrees.
With more than 20 years of experience of living with natural herbs, he defines folk remedies as an easy homemade alternative to Western medicine that uses organic ingredients to treat health conditions.
“People who cannot afford expensive medicine should learn more about folk remedies,” Chun said.
He noted that around 90 percent of medicinal herbs are safe to eat, including dandelions, lettuce, shepherd’s purse, mustard leaf, wild rocambole garlic, adlay, dropwort, balsam, chrysanthemum and wormwood.
Chun said that while modern science can cure trauma, such as injuries from accidents, internal treatment can be done at home for other conditions.
“People think modern science is life’s only savior. But what about all those medical sideeffects and accidents? People should reconsider and try giving Korea’s traditional folk remedies a go,” Chun said.
Just remember chomillan is best drunk in one very, very quick shot.