This collector’s toy story is one of joy

This collector’s toy story is one of joy 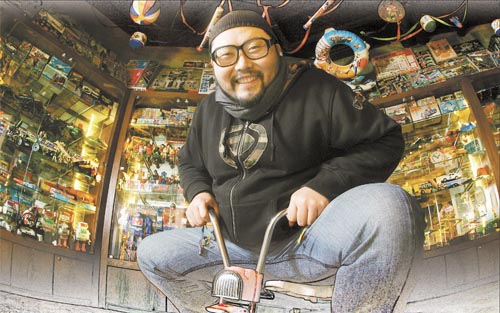 In the upcoming film “Mr. Magorium’s Wonder Emporium” whimsy rules in an enchanted toy shop. But for those who will see the film and sigh wistfully, it seems Korea has its own real-life Mr. Magorium’s Wonder Emporium. It’s called 20th Century Boy and Girl, a toy museum in Heiri, Paju.
When an adult first steps into 20th Century Boy and Girl, it’d be an understatement to say it’s an amazing experience. For those nostalgic for their youth, it’s a dream come true. Adults are struck speechless as they wander the room full of Korean toys that date back as far as they can remember.
The toy museum’s interior replicates the streets of old Korea before flashy neon signs took over. Small stores display old 1960s and 1970s records and discontinued magazines like Sunday Seoul are stacked next to each other. Endless arrangements of toys decorate the museum, from tin cars to plastic dolls with ugly, distorted faces and oversized Batman, deformed Superman and G.I. Joe action figures. Dolls of Japanese anime characters are also on display.
A couple well over 30 touring the museum with their toddlers couldn’t contain their excitement as they walked around the room.

“Oh, look!” cried the mother. “It’s a toy that I used to play with when I was a girl.” Alas, the little boy holding her hand didn’t seem too interested.
Other children wailed at their parents, begging to get them out of there. Another much younger boy couldn’t take his eyes off the colorful toys in front of him.
Two men in their early 20s entered a room with the latest anime characters with a twinkle in their eyes.
“Look! It’s Gundam!” shouted one. “Wow!” exclaimed the other.
Two women about the same age tried to ride an old-fashioned tricycle in the room and took pictures of their visit to the world of the toys of yesteryear.
A moment later, a chubby man in black-rimmed glasses with a neat black beard emerged from one of the storage areas. He was Hyun Tae-joon, the collector of these toys who opened the museum this August.
Pulling up a small stool that disappeared when he sat on it, Hyun, 41, said there are more than 5,000 toys displayed in his museum. “There’s an additional stock of 10,000 toys,” Hyun said. “I just don’t have the space to put them on shelves here.”
On Hyun’s business card he lists toy collector, cartoonist, illustrator and essayist as his occupations. He said collecting toys accounts for only one-third of his work.
Hyun has been collecting Korean toys for more than a decade. “I was traveling abroad in the late 1990s and noticed how in foreign countries they had stores that displayed toys of bygone eras. I wondered if we had a similar store,” Hyun said. Upon his return, he started looking for old toys that he used to play with.
“I noticed we didn’t have any collection of toys that we could look back on,” he said. “Without one, it was hard to relate to our lives before the worries of adulthood took our innocence.”
Thus began his quest to collect forgotten Korean toys. 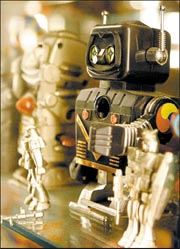 He has traveled to small stores in every corner of the country to find toys that have been sitting on the shelves for decades, forgotten by customers.
It wasn’t easy collecting the old toy relics. “When I did it alone it wasn’t all that difficult,” Hyun said. “The store owners were just glad that I bought toys that they hadn’t been able to sell for years. They were glad to sell them.
“But one time when I was visiting a store in the summer, I was sweating heavily and carrying black plastic bags in both hands,” Hyun recalled. “When I walked into the store, I must have looked like some sort of bum. The store owner, a middle-aged woman, told me to leave,” Hyun said. “What could I do? I just walked out.”
Hyun also remembered his trip to Jeju Island. “Unfortunately, most of the stores had already gotten rid of their old toys,” he said. “I spent a lot of money on the trip, something around 400,000 won [$435] for the flight and accommodation.”
Things got worse after he published his book on old-time Korean toys. “Young people started traveling to other stores around the country searching for toys,” Hyun said. “The problem is, these young people mess up the stacks of toys and leave the store without putting them back the way they were. The store owners really don’t like this. By the time I get to the store and tell them I’m there to buy their old toys, they give me this unpleasant stare.”
Other people also started to appreciate products from a bygone era. Hyun said some people even claimed that toys from the past had significant monetary value. “Then some of the store owners mistakenly thought I was profiting from the toys I had purchased and disapproved,” he said. The toy collector said he has not sold any of the toys he has collected. He has made a few exchanges, but only when he had more than one of the same toy. “By exchanging toys with other collectors I was able to widen the variety of toys in my collection,” Hyun said.
Hyun sometimes travels to places like the United States and neighboring Japan. “Korea back in the 1960s and 1970s was one of the biggest toy exporters,” Hyun said. In fact, one of the toys he found in a store in Korea had Arabic on its case. “Korea even exported to places in the Middle East and Mexico,” he explained.

His wife had no idea about his odd and financially exhausting hobby for a long time, “Not until I published an essay on the collection of toys I had,” Hyun said. The book came out in 2002. Before, he hid his collection in his studio where he drew illustrations and cartoons. “I guess I hid it well since she never noticed it until I told her,” he said.
As he collected the toys, Hyun started making a record of his collection. “I noticed there wasn’t a database on toys that were made in Korea,” Hyun said.
He also interviewed toy manufacturing plant executives. This way, Hyun said, he started to learn the distinguishing characteristics of Korean toys and their history. 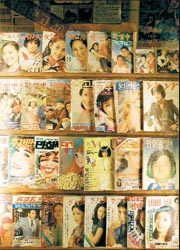 According to the toy collector, Korean toys in the 1960s and 1970s were predominantly war-related. Helmets, guns and toy soldiers were abundant. “Korea was in a military standoff with North Korea,” Hyun said. “We were also under a strong military regime, so toys with related themes were manufactured.” Hyun noted that many of those Korean toys were replicas of German military weapons from World War II. “That is because our toys were copying those made in Japan. Their toys were based on German military equipment because they were allies during the war.”
By the 1980s, Hyun said toy guns and soldiers’ helmets were replaced by robots and animation characters because of the numerous Japanese robot cartoons imported to Korea.
By the 1990s, kids were looking elsewhere for entertainment: the computer.
“In the 1970s and 1980s parents were busy so they let their children run around all day,” Hyun said. “But in the 1990s parents became very sensitive about raising their children and bought them expensive toys. Rubber band guns and cheap plastic or tin toys weren’t selling well anymore.

“With more and more households buying computers, children stayed away from conventional toys. Then numerous toy manufacturers went out of business,” Hyun said.
Hyun’s first-grade son, Jeong-woo, is a child of the computer generation.
“I really don’t stop him from spending time in front of the computer because sometimes I need to take a break,” he said.
The toy collector said it’s rare to find companies still manufacturing toys in Korea.
Hyun said Japan helped boost the toy industry in Korea. “Not only did Korea copy a large majority of toys from Japan, but thanks to them, our boys grew up loving robotic toys and other animated characters,” Hyun said.
Most of the toys on display at the toy museum were copies of Japanese anime characters such as Atom (or Astro Boy in the United States), Mobile Gundam and Mazinger Z.
“In the past, before Korea joined the OECD and signed the intellectual property agreement, Korean toy companies copied everything without the consent of the original creators,” Hyun said. “The intellectual property protection was another contributor that brought about the downfall of the Korean toy manufacturing industry. As I interviewed toy manufacturers, they seemed to have made a lot of profit in the old days since it was far cheaper to copy a toy than to actually come up with an idea and develop it.”
Hyun said the reputation of Korean toys in the international market is low because of their heavy reliance on replication. “In Japan and the U.S., toys are original and many are based on globally popular characters,” Hyun said. “In contrast, Korean toys are bad copies of the originals.”
Nevertheless, the toy collector said he loves Korean toys because of their quirky designs and flamboyant colors that are hard to replicate today. On one shelf he pointed to three sets of Atom figures to make his point.
“If you look at the first one, the toy looks perfect, just like the animated character,” Hyun said. This was the original toy made in Japan.
“If you look at the second Atom, which is a copy of the original and made in Korea, the boy’s facial expression is completely different. The third copy doesn’t even try to completely copy the original. Instead of carving the eyes they just used a sticker,” Hyun said. The two Korean-made Atoms had different skin color and the faces looked completely different. Another Atom frowned as if he were on the verge of tears.
“Korean toy copies are not completely perfect, especially those dating back to the 1960s and 1970s,” Hyun said. “But it is those imperfections that create an entirely different appeal to the toy, which I love the most. It is what draws me to them.”
Hyun collects toys not because he is a “kidult,” a portmanteau of the words “kid” and “adult.” It’s a term he despises.

“The term kidult has a negative vibe to it which seems to refer to those who are incapable of growing up,” Hyun said. “It is a label that those who can handle reality put on those who try to revert to their childhood.” He said many media people misunderstand his cause and label him a kidult.
“One of my dreams is to build a nationally approved toy museum,” Hyun said. His current museum is considered more of an exhibition that is not government-approved. Next month Hyun’s collection will be exhibited in New York.
Hyun said his museum is a noble cause.
“Like historical museums that display pottery dating back to the Joseon Dynasty, the collection of toys is a reference to the world we once lived in,” Hyun said.
“But unlike Joseon pottery, which was used by our ancestors, the toys that are on display have a more personal meaning to those who visit the museum. It helps them look back to their innocent childhood, and it connects us with what we might have lost as we aged.”