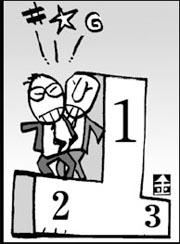 Sprinters run as hard as they can from the start to try to win the race. However, it is very rare for an athlete to lead a middle-to-long distance race at the beginning, and then ultimately finish first.
If the athlete pours energy into the race at the beginning, he risks failing to be able to keep pace. Therefore, a variety of strategies are implemented in such races. Athletes are unwilling to move to the front early in the race or lag far behind. They know that if they fall behind the crowd, it will be difficult to catch up in the last stage.
The ultimate goal of the race is to win first place, but it is hard to lead throughout the race. A person who is at the front and runs into a strong headwind can use up his strength. Running first also makes it harder to see how far back the other runners are.
Therefore, during a distance race, there is fierce competition to be in second place at the beginning. At the last moment, it is good to occupy second place, with a view toward coming in first.
Winning the race is a good thing; but second or third place has its own significance, too.
In marathons, even simply finishing the race is worthy of praise. Meanwhile, a person who gambles on speculation can have only one winner.
Companies are in cutthroat competition with each other for patents. They are devoted to conducting research and development to acquire patents for new technologies. If a company runs one step ahead and wins the patent, it can corner the market.
In this sort of competition, being in second is no good. In fact, the second place person loses more than everyone else in a winner-takes-all game. The third place candidate might give up early in the race, but the second place candidate loses everything, despite great effort.
A presidential election is also a winner-take-all game. The presidential hopeful who wins one more vote than his competitor will become president; the person who finishes second gets nothing.
Strangely, it seems that two candidates are fiercely competing to finish in second just a week ahead of Korea’s 17th presidential election.
The front-runner has a huge lead, and the second and third ranking candidates are alternating with each other. As long as they know that the race for president is a winner-takes-all affair, they might not run for second place. However, if they hope for a dramatic reversal at the finish, the goal seems close from the second position.