[Talk of the town]Just don’t call her funny face

[Talk of the town]Just don’t call her funny face 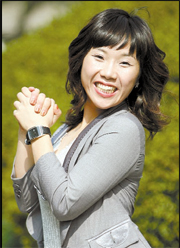 She may not have a hottie’s body, but she sure is photogenic.
Funny-girl Shin Bong-seon won the award for most photogenic comedian at the eighth Korea Visual Arts Festival, hosted by the Association of Korean TV Cameramen.
Her winning looks came as a surprise to the public, as past recipients of the award have been celebrated for their trim figures. Shin, on the other hand, is pleasantly plump.
Her win was quite a coup over those who made countless snarky remarks about her weight throughout her career.
Last summer, when she returned to the comedy show “Gag Concert” after a few months’ break, Shin checked an Internet bulletin board to monitor the public reaction to her performance.
But when she found only posts such as “It’s disgusting to see her again” and “Her face looks as bad as her piggy body,” she considered quitting.
However, with the support of fans and colleagues, Shin rose to the top by merit of her quick wit and glib repartee.
At the awards ceremony held last Friday at the head office of MBC, Shin claimed her award wearing a short dress.
“My management office chose the dress, and told me to show off my legs as much as I can,” Shin said, to the laughter from the audience. “It’s a glorious day for me.” By Lee Hyo-jeong