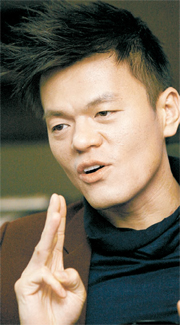 Park Jin-young’s career has come full circle, and his latest album is suitably titled “Back to Stage.”
After a six-year break, Park is once again behind the mic and back in front of an audience. His new album, his seventh, contains hip-hop dance songs, including “Single,” featuring Bobby Kim, “KISS” and “An Afternoon Breakup,” featuring Min Seon-ye, the lead vocalist from the Wonder Girls.
“The album reflects my six years as a producer. It is like a time capsule that captures my 30s,” Park said.
Park made his debut back in 1994, and then went on to produce for Asian star Rain and teen idols g.o.d. In 1999, he set up JYP Entertainment, his own music company, and gradually got involved in the Western music industry.
He soon joined mainstream popular music as he started to produce songs for top American performers like Will Smith.
Back home, Park produced and choreographed the nation-wide hit “Tell Me” by the Wonder Girls, a group Park nurtured.
Now he wants to dance again.
At the age of 35 that might sound exhausting. But Park said age is merely a number. He does not mind the aging process.
“I love myself even more in my 30s than I did in my 20s, and I assure you that my 40s will be even better. Emotions deepen as you get older,” he said.
For this new album, Park worked out to lose 22 pounds, not just to build muscle, but to regain his dancer’s physique.
Dance has been everything in Park’s life. He said he used to dance to the sound of his mother washing uncooked rice.
“People recognize dance as mere concrete science. But controlling your body is harder than developing your mind and soul,” he said.
And to control the body, practice is the simple key to success, Park said.
“While others work five hours a day, I work a maximum of 17,” Park said. “I don’t sleep more than five hours and I don’t spend more than 20 minutes on each meal.” The rest of the time is spent practicing.
Drinking is hardly ever on Park’s agenda. While people say drinking is useful for networking, Park said that networks naturally build up as you concentrate on your work.
The groups that Park has groomed have absorbed his work ethic. He has taught them that nothing comes free and that you have to strive hard to achieve your dreams.
Park said he was impressed by groups like g.o.d. and Wonder Girls at their auditions because they revealed a determination to practice.
Rain charmed him with his tough spirit, g.o.d. with their guy-next-door appeal and Wonder Girls with their sense of responsibility.
Park picked out Min from Wonder Girls for special comment. “She had a hardworking spirit and was more mature than others her age,” Park said. Min was 13 years old when she auditioned.
“Sincerity is more important than ability and talent,” Park said. “Early education is also important.”
He noted that at first, Min did not know how to dance properly, but she has worked hard at improving since she got her first break at age 13.
“If Min had started training in middle school, it would have been more difficult for her to develop as a dancer,” Park said.
Even though he’s a successful producer and musician today, Park had some tough years before his break in 1994.
Before 1994, he failed every audition he attended. He was told he didn’t have the physical appearance to become a singer.
And when an entertainment company finally took him on, he worked for no pay.
But he refused to quit, and he worked hard to establish his own identity. His hard work took him step by step closer to his dreams.
Next year, Park will debut three Korean singers ― Lim Jung-hee, G-soul and Min ― in the United States. He is the first producer in Aisa to do so.
And he plans to wrap up his JYP Entertainment company in 2009 and go back to his roots as a singer and composer.
There seem to be no limit to what Park can do.
“All you need is self-confidence. There’s nothing to be worried about,” he said.