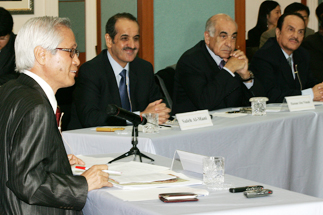 Academics, government officials and other experts from the Middle East and South Korea gather for the fifth South Korea-Middle East Cooperation Forum last weekend at the Itaewon Mosque. The sessions focused on ways to build greater understanding and cooperation between Korea and the Middle East. The event was sponsored by the Foreign Ministry.