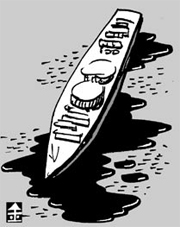 The shipbuilding legend of Chung Ju-young, founder of the Hyundai Corporation, is never complete without the story of how he sought overseas funding by showing bankers a 500 won note which bore the image of the world’s first ironclad ship, proof of a long shipbuilding tradition in Korea.
As a shipbuilding nation, Korea is now making its greatest leap forward. It ranks first in the world in the industry, with Hyundai Shipbuilding at the top of the list. Korea has the “Big Three” companies in the industry as well as six or seven other firms in the top ten. Oil tankers, including oil container ships, built a firm foundation for our growth as the strongest shipbuilding country.
The 1989 Exxon Valdez oil spill in Alaska, the worst in history, gave Korean shipbuilders an opportunity to further improve themselves. The disaster led to a new regulation that obliged ships to have a double hull, which increased demand as companies replaced existing tankers. Hyundai was the first firm in Korea to build a double-hulled crude oil carrier in 1991. A decade after that, Daewoo Shipbuilding constructed the biggest tanker in the world, a 450 kiloton double-hulled carrier.
Tankers made shipbuilding one of Korea’s flagship exports along with semiconductors and automobiles.
However, that very same tanker boom led to an oil bomb that has devastated the West Sea of Korea. Damage is extensive, particularly because the wrecked ship was an old, single-hulled model. The disaster is too large to simply blame bad luck, since the cleanup has been by no means satisfactory. The entire risk management system, including the damage estimate, first response, information sharing and control hierarchy, did not work at all.
The management authority claims to have an elaborate manual specifically for addressing disasters, but it remains to be seen whether such a manual exists. They seem to be doing no better than in 1995 in South Jeolla when a previous spill and a disorderly reaction to the disaster worsened the extent of the damage.
The U.S. Coast Guard has speedily offered cleanup assistance based on knowledge and experience gained from addressing similar catastrophes such as the Alaskan spill. One may feel grateful, but not without a tinge of shame.
When an economy grows, the scale of man-made disasters and natural catastrophes also increases.
If we are indeed serious about realizing the slogan “Safe-Korea!” we need to apply the double-hull approach in shipbuilding to the national risk management system as well.