Altar Boyz will answer your prayers

Altar Boyz will answer your prayers 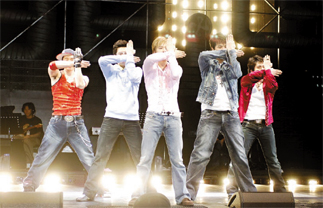 The musical “Altar Boyz” is more like a boy band concert than a traditional musical. Provided by Musical Heaven

Ladies, get ready for a real treat. A band of fit, young, good-looking men will not only be singing and dancing for you on stage, they will respond to your most private personal questions.
The musical “Altar Boyz” is about five guys in a boy band making their last world tour. Matthew, Mark, Luke, Juan and Abraham claim that by the end of the concert they will reduce the number of burdened souls in the audience to zero.
In between the songs and the dancing, the performers will take questions posed by the audience and use a machine called “Soul Sensor DX-12” to search out answers.
The musical, which is to be staged at the Culture Place EDA, Daehangno, central Seoul, is unlike other musicals since it’s not based on a story. The Altar Boyz is more like a boy band concert.
The musical debuted on Broadway in 2005 and was introduced to Korean audiences in April last year. It was revived in July with Kim Tae-woo of the real boy band g.o.d. For this December run, Han Ji-sang and Kim Se-joon, who both appeared in the April 2006 show, will be reprising their roles as Mark and Luke.
According to the producers of the show, Musical Heaven, communication between the performers and the audience will be more interactive than at last year’s performances, which were held at the Chungmu Art Hall and Hoam Art Hall. The stage at the Culture Place EDA is much smaller, which means audiences can pick up every breath the performers take.
N Sync or the New Kids on the Block may have split up, but the Altar Boyz, as long as the musical is on stage, will continue to drive its female fanbase crazy.