A Chinese town in a Korean city

A Chinese town in a Korean city

Shops and restaurants in Garibong 1-dong, known as Joseonjok Town, give the area an authentic Chinese atmosphere.

It’s Sunday afternoon here in Garibong 1-dong, an area in southwest Seoul also known as Joseonjok Town, referring to the ethnic Koreans from China who populate the neighborhood.
The streets are unusually crowded with residents and workers on their days off, and a quick glance suggests the neighborhood has a different aura from the rest of Seoul.
Most of the signs above the stores are written in Chinese characters, the simplified kind used in mainland China, and street vendors selling cassette tapes play Chinese pop songs that are loud enough to reach the street’s end. Surrounding one vendor, people are giggling at a Chinese show playing on a small TV screen.
Walking a few blocks, you see signs on the street advertising phone rooms. The name automatically conjures up images of lewd lounge rooms across Seoul where local men drop in to have phone sex. But a phone room in Garibong 1-dong is an indoor phone booth where visitors pay to make long distance calls to their families and friends back home.
Between the streets, there is a traditional market where merchants sell imported goods from China.
One food vendor in the market says the best-selling items in her store are hard drinks like kaoliang, a strong liquor made from fermented sorghum.
The shop owners here open their stores late and close late. The peak hours for the market are late evening, when residents do the grocery shopping on their way back home from work.
After dusk, Garibong 1-dong takes on another guise. The shops lure customers with bright lights and neon signs.
The aroma of exotic food wafting out of the restaurants is overpowering. Vegetables and meat on skewers is a trademark food you get here. Then there are foods like baotze or mizhang, traditional Chinese snacks similar to dumplings and Korean-style sausages.
On their days off, most Korean-Chinese workers gather in this neighborhood. They eat, drink and talk about their families back home. Once they are drunk, they head to nearby karaoke joints, of which there are about 20 in this neighborhood.
You also see a lot of job adverts posted in this area for contract workers in factories, construction sites and farms. The ads have large print on the top that says “ethnic Koreans from China are welcome.”
Most employment centers depend on hooking up new settlers with Korean employers, but business is not like it used to be.
“It’s getting harder every day,” one agent says. “It’s tough even for Koreans to get a job these days.”
Out of 30,000 ethnic Koreans from China living in Korea, 7,000 are currently settled in this neighborhood, an area that is also known as “a beehive town.”
Most accommodation consists of a single room the size of a prison cell, originally built for migrant factory workers. The rents are among the cheapest in Seoul.
It was shortly before the Seoul Olympics in 1988 that ethnic Koreans from China began to settle in this neighborhood, according to the Guro District Office.
They were mostly peddlers who went back and forth between Korea and China, selling clothes and miscellaneous goods. The number dramatically rose in 1992 when Korea and China opened diplomatic ties.
As of September 2007, the Ministry of Law said there were 288,000 migrants from China in Korea. One out of three foreign citizens in Korea is an ethnic Korean from China, the ministry reported.
Recently, the Korean government eased immigration requirements for ethnic Koreans. Already nearly 22,863 ethnic Koreans have H-2 visas, the new worker’s visa, which the Korean government began issuing on Nov. 12.
But why do so many ethnic Koreans come to Garibong 1-dong? A man who wishes to be identified only as “Shim” says he has been living in the neighborhood since 2001, paying 150,000 won ($162) rent a month.
“Whenever I get homesick, I come here,” says Shim at the town’s shelter where ethnic Koreans come to chat. “I’ve been to many places around the country, and various things have happened to me. Here I can open my heart freely and have a drink with people like me. I can hear news about my hometown.”
By 10 p.m., the shelter closed and we moved to Shim’s two-room house.
“I live alone,” he explains. “A friend uses the other room and we share the rent.”
Underneath the drying underwear hanging in his room Shim keeps a framed photograph of his family. It was an unusually bright color portrait for such a shabby room.
On the table sat a bowl of soup with a few slices of radish and chili pepper ― his breakfast for tomorrow.
“Back in Yanji, I had a pretty good life, too,” he says. “I was a gardener for 30 years. But I decided to come here to earn more money. I wanted to send my only son to a better school. Coming here was the better option. I earn much more money than back home, but the cost of living is so expensive here. I spend just the basics for living, but I can only send about 500,000 won a month back home. But this neighborhood is relatively cheap.
“That’s why so many ethnic Koreans settle here.”
In the middle of his room, there’s a second-hand computer on his desk. He saved up and uses it to look for work. 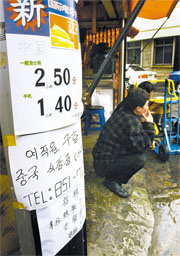 Advertisements for phone cards and jobs are posted on the streets of Garibong 1-dong. [JoongAng Ilbo]

Garibong 1-dong is one of those rare areas in Seoul where you can find many second-hand stores selling everything from clothes to electronic goods.
There’s also a strong sense of community since many settlers have set up restaurants and stores full of imported Chinese goods. This makes it a congenial district for new migrant workers from China to find their feet.
But more importantly, especially for a city as expensive as Seoul, the biggest attraction is the cheap rent. Most accommodation consists of a single room and kitchen. During the massive industrialization of the 60s and 70s, the rooms were built for workers who flocked to Seoul for work in the huge factory compounds nearby. Those compounds have now been transformed into high-tech industrial complexes and neighboring fashion outlets.
The houses here might look rundown, but you’d be hard-pressed to find empty rooms. One real estate agent in the area, who identifies himself as Cho, 64, says it’s because “many ethnic Koreans from China fill the area so they can save every penny.”
Rooms are rented out for 100,000 won to 150,000 won with additional key money, a kind of security deposit, of 1 million won.
A lease is rare, as it requires more key money, but once in a while migrants save enough to secure a lease. That way they waste less cash on rent. Many homes here still use coal for heating. In winter you still see ambulances picking up tenants poisoned by carbon monoxide.
Life is going to change in this area, though. By late 2009, the government is launching a reconstruction project. That’s bad news for residents here, as rents will inevitably rise.
The day starts early in Garibong 1-dong. By 5 a.m., the lights are lit, and the streets are busy with people heading off to work, many clasping hammers, which is an unnerving sight. These are laborers, and they need the tools for work.
One worker, identified only as “Kim,” was heading to work recently. He came to Korea in 1994, and now works as a mechanic on a construction site at an apartment complex undergoing massive redevelopment.
That morning, he barely made the bus. “I ran into a mess after missing my bus in the morning. Today, I even skipped breakfast.”
But Kim is content. Unlike others, he has a regular job. For many migrant contract workers, a jobless month is like a day in hell.
Shim, the man from the shelter, was also out of work. His arthritis has gotten worse. He can barely hold anything heavy because of the pain in his knees.
“It’s hard enough to look for a job because I am old,” he says. “My days are dark after I’ve gotten sick.”
On his name card he has written, “I can work hard with endurance, love and sweat.”
But for ethnic Koreans, jobs are not guaranteed even if you are healthy.
Jeong Hae-un, a construction worker, was turned away from many jobs because he was not from Korea.
In a community newspaper, he shared his personal experiences after a job interview.
“‘Are you an ethnic Korean from China?’ asked the employer. So I said, ‘My father’s hometown is in Chungcheong, but I am from Yanbian.’ I was turned down immediately, and told I shouldn’t bother coming back. Coming out of the subway exit after the interview, I was so mad I couldn’t speak.”
These days, there’s been a notable rise in the number of gambling machines in the neighborhood. Most customers are the ethnic Koreans from China. The shops include “Story of Sea,” an infamous gambling chain that disappeared from most working-class neighborhoods in Korea after a major political scandal.
Kim Yong-pil, the editor of the town newspaper, says many ethnic Koreans come to the stores on their days off and spend a small amount of money, about 10,000 won to 20,000 won.
There have been some gambling-related problems. Three ethnic Koreans had a knife fight over a waitress recently, and just over a month ago a man was stabbed to death during a fight.
Other dilemmas face the people in this area. Some Koreans in the construction industry say they should get paid more than ethnic Koreans, a claim that has outraged the migrants.
“Many Koreans treat us like foreigners,” says Lee Seon-ja, a 60-year old woman who came to Seoul in July from Tung Ning in Heilongjiang, near the Russian border, where her family runs a photo studio.
Her story illustrates the kinds of problems many of the residents face.
“One of my in-laws paid 120,000 won to a recruiter in Korea to get a job here,” she said. “But they messed up her documents and she ended up not getting paid. When she wanted her money back, the recruiter swore at her. Then they told her that she can only get 100,000 won back and ended up charging her 20,000 won for a phone bill. It was simply a bad experience,” she shrugs.