Find out if this ‘F word’ flick is fun

Find out if this ‘F word’ flick is fun 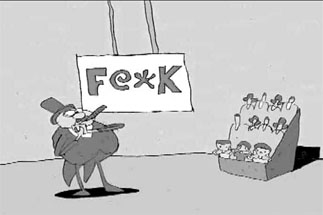 I started learning Korean, as most of us do, in its “polite form” ― with all the imnida intact. It was only later that I discovered one could lop off those two or three inconvenient syllables and just go with a plain old hae or anhae (and naturally many levels in between).
Blame democracy or a lack of moral fiber, but American English lacks such elaborate linguistic acrobatics at the service of social hierarchy.
So I imagine Koreans who start learning English don’t immediately realize there is one word that turns all of us into ninjas ― tiptoeing around it so gingerly.
That word, of course is a four-letter vulgar verb meaning sexual intercourse, the notorious “F” word.
And though it’s come spewing out of actors’ mouths for years, “F*ck” is the first movie devoted specifically to this bit of obscene speech so well loved in Hollywood ― ever since “Painless Pole” John Schuck uttered it in “M*A*S*H” in 1970, just one of the tidbits this film will teach you.
The film starts with the origins of the word, which accomplishes a feat that will probably never be repeated: It gives dictionary usage editors a chance to look edgy and cool.
Geoffrey Nunberg from the American Heritage Dictionary sets the battle lines: The “prudes and the profaners, these two groups of people who are locked in an eternal codependence.”
Sounds really cool, never mind that two of the words in that sentence aren’t in the American Heritage Dictionary.
Apparently the word is not an acronym for anything. It may have Germanic origins and it might have come from something that means to pound or hit. No one’s really sure.
We do know that its first recorded usage was in a poem to bash a monastery, which should render moot all the complaints that Western civilization has become more vulgar now than it was 400 years ago.
Nunberg, the American Heritage Dictionary editor, suggests, “In a sense you could think of that word as standing in for most of the social changes that have happened in the 20th century, at least a great many of the important ones.”
That might seem a stretch, but director Steve Anderson backs it up with footage from Woodstock, Vietnam War protests and commentary by rapper-cum-actor Ice-T and Chuck D on its political use in their song “F*ck Tha Police,” which they recorded way back when they were in NWA.
Naturally, there’s a parade of clips of highly placed politicians from Richard Nixon to Dick Cheney using the word in all its vulgar glory.
The film keeps a playful atmosphere by inserting little newsreels about obscenity called “breaking f*cking news,” animated interludes by indie artist Bill Plympton, and, of course, by including plenty of interviews with stand-up comics.
Billy Connolly is on hand to provide his hilariously insane Scottish blathering (watch for the bit about shouting the word at a Tibetan monk). And of course, there’s commentary on Lenny Bruce’s obscenity convictions for his use of the word and on George Carlin’s notorious “seven words” bit. Unfortunately, the film features nothing from the latter comic himself.
Obviously, this review has been censored by my editors. Without censorship, this word would be denied the very power that makes it so appealing to those who would use it in their comedy bits, rap songs or political protests.
This point is obviously not lost on Anderson, who also includes interviews with those who would see the word done away with. Some are moderate and practical, others say things that are as funny as Carlin, but unintentionally so. The pinnacle is talk show host Dennis Prager trying to tell us that Jesus cares most about the words that come out of our mouths, and that the “F word” is going to lead to the downfall of Western civilization.
But Alan Keyes is right to say (I don’t know if I’ll ever type that phrase again) that the Bible says that in the beginning there was the word ― and that words most definitely matter.
Anderson has teased a varied and fascinating look at American culture out of a one-word prompt.
I wonder if the Korean language can boast a similarly polarizing word.