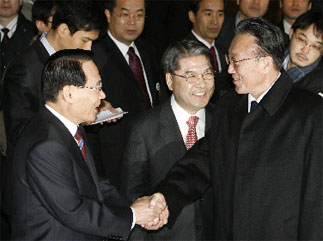 Momentum in inter-Korean economic cooperation during the waning months of the Roh Moo-hyun administration will fall into the lap of his successor. Whoever wins the presidency will have to examine his priorities and marshal the support of the public as well as various factions in government to implement what has already been agreed.
The Oct. 4 declaration issued at the end of the summit between Roh and North Korea leader Kim Jong-il and the subsequent Nov. 14-16 meeting in Seoul between the prime ministers of the two Koreas broke new ground for economic cooperation.
Among the notable points reached by the prime ministers in November was a negotiating structure that will have them meet on a semiannual basis. This is an upgrade in the level of talks. The next meeting is expected to be in the first half of 2008 in Pyongyang. It will be the next South Korean administration’s first chance to display its stance toward Pyongyang.
The first tangible result of the recent high-level meetings came this week with the start of inter-Korean cargo train service for the first time since the Korean War. The reconnected line between Munsan in the South and Bongdong in the North will pave the way for faster, more efficient transport of goods made in North Korea for South Korean companies.
It also will provide a potential link to the Trans-Siberian and Trans-Chinese railways, which would enable Korean goods to be shipped to Europe faster and cheaper than by sea. Also due soon are expanded Internet and wireless communications in the North, faster customs clearance and easier entry/exit procedures for South Koreans traveling to the North.
Both Koreas have also agreed to repair railroads and highways for shared use inside North Korea. The work will begin with the Kaeseong-Pyongyang highway and the Kaeseong-Sinuiju railway. Once opened, the railway and highway are expected to facilitate people-to-people contact and material exchanges between the two Koreas.
This also may lead to the development of a logistics base halfway between the Kaeseong Industrial Complex, the special inter-Korean industrial zone in the North built with South Korean money, and Sinuiju, on the Sino-Korean border.
The Kaeseong Industrial Complex itself will likely become a model for future projects, while further spurring the pursuit of development initiatives in Nampo, Anbyeon and Haeju.
In anticipation of higher utilization capacity due to the projects, investment and development of infrastructure-related industries are likely to grow. For example, South Korean construction material suppliers will likely consider investing in cement factories in the North. Ultimately, North Korea will find itself more open to the outside world.
Carrying out multiple projects simultaneously will necessitate securing substantial funding and public support by the next administration.
Further economic collaboration projects will need to be reached in a systematic way so that the inter-Korean relationship can develop in a stable, sustainable manner. The new negotiation protocols and the various agreements reached in October will provide a structure.
Government officials are apparently leaning toward using the existing North-South Cooperation Fund as a funding mechanism because it can be flexible in its application. The National Assembly must approve spending from the fund since it represents taxpayer money.
Both Koreas should take sufficient time to earn public support for these projects.
Over the last 10 years, the inter-Korean relationship required a driving force to move ahead in the face of diverse views.
Now it is imperative to persuade the public and obtain their consensus on the need for inter-Korean economic cooperation if the relationship is to develop further.
Both Koreas need to acknowledge that they disagree on how to facilitate and develop exchanges. Some observers have criticized the South for its apparently conflicting views on the development of further relations, while the North is more fully committed to further development. But both Koreas are equally determined to strive for a better relationship.
From this point forward, economic ministries are likely to play a more important role in inter-Korean exchanges. Problems and deficiencies, however, that arise from the unique situation on the Korean Peninsula (particularly with respect to passage and customs clearance procedures in Kaeseong) are in urgent need of reform, and ministries will play an important role in making progress in this area.
Furthermore, as always, the gap between what the North says and reality must always be considered, even if the North seems unaware of the true situation.

*The writer is a research fellow in the Global Studies Department of the Samsung Economic Research Institute.