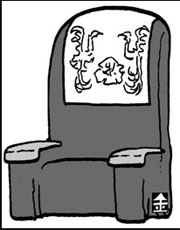 Deng Xiaoping chose Jiang Zemin as his successor with the agreement of other senior members of the Communist Party. In addition, the paramount leader and father of China’s reopening to the world in the 1970s and 1980s also groomed Hu Jintao as the heir to Jiang, preparing the next two generations of China’s leaders. In contrast, Mao Zedong purged his two heirs apparent, Liu Xiaoqi and Lin Biao, in a bloody political fight, only to leave power to the disappointing alternative, Hua Guofeng.
Russia is also seeing bloom in succession politics. President Vladimir Putin has anointed First Deputy Prime Minister Dmitri Medvedev to be the candidate of the ruling party in the March presidential election to succeed the 55-year-old Russian president who is barred by law from a third consecutive term. It was Boris Yeltsin who picked Putin, who at the time worked in the KGB. The former KGB head’s career went on a fast-track, as he assumed leadership of the federal security bureau, which succeeded the KGB, then prime minister and president-in-waiting through the handover of power from Yeltsin. In spite of the political favors he enjoyed, few people would disagree that Putin is the leader who established the foundation of a “strong Russia.” Thus, at least in the near future, the succession pattern from Yeltsin to Putin and Medvedev is likely to continue.
Raising an able successor during one’s term of office is the last contest for a national leader. In the United States, where electoral politics flourish, the president who fails to recreate his rule is likely to lose points when his administration is assessed by history.
However, power is cold-blooded; heirs frequently crush their predecessors. An example here is the relationship between former presidents Chun Doo Hwan and Roh Tae-woo.
Malaysia’s former Prime Minister Mahathir Mohamad also saw a bad ending. Having purged his previously chosen successor, Anwar Ibrahim, who rebelled against him during the 1997 financial crisis, Mahathir handed over power to Prime Minister Abdullah Badawi four years ago. These days, however, Mahathir pours invectives on Abdullah, saying he made a mistake and chose the wrong person.
A joke has it that the last tactic of President Roh Moo-hyun in the coming presidential election will be to declare his support for candidate Lee Myung-bak. Lee will instantly lose points if he is tainted by that endorsement, because to be known as a second Roh Moo-Hyun could be fatal.
Korea lives in a bitter age for successors.