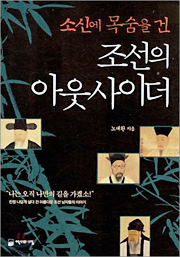 The twelve personalities in “Joseon’s Outsiders” were too stubborn to be included in the mainstream. They stuck to convictions that were out of synch with those of their contemporaries.
One is the writer Lee Ok (1760- 1812) whose creative writing style was criticized because it lacked the formality that was expected of scholars. He refused to comply with the standards of the day, even after King Jeongjo jailed him twice.
The rebel leader Yun Hyu (1617-1680) and Kim Byeong-uk (1808-1885), who devoted his whole life to the welfare of others, also represent the tenacious scholar in this 334-page book. They were loyal to their beliefs, not to the expectations of society. Regardless of whether they were right and wrong, these outsiders epitomize the notion of personal integrity.
Joseon’s Outsiders is published by Yeoksauiachim (The Morning of History), and costs 13,000 won ($14.10). The author is No Dae-hwan, a professor of Korean history at Dongyang University, North Gyeongsan.