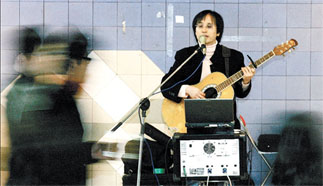 Although busking might seem like the bottom rung for an entertainer, many artists who have helped shape the arc of 20th century pop culture, including Marcel Marceau, Bob Hope, Lucinda Williams and Beck, got their start by performing in the streets. This heritage raises the bar of expectation. To ensure the quality of Korean buskers in places like the Cheonggye Stream and Seoul subway stations, organizations like Rail Art and the Seoul Foundation hold auditions for potential performers. As of this year, there are around 200 bands who brave the blistering summer heat and unforgiving winters on the city streets around the nation. But they are rewarded with just pocket change and a smattering of applause.
The JoongAng Daily met with four such acts to find out why.

A scruffy old man with a half-eaten scrap of bread and soju breath plunked himself down on the floor of Nowon Station as the sun started to set outside. He yelled out, “Hey, sing me something by Kim Chu-ja [a Korean trot singer]!”
The request was for Gong So-ya, 42, a folk singer who has been performing in subway stations for the past four years after his self-produced first album bombed. For two to three hours a day, Gong plays entertainer, human jukebox and even babysitter, especially when soju is involved.
As a kid, Gong wanted to star in action films. After graduating in theater and cinema studies at Hanyang University, he took small roles in local action flicks, but he didn’t make much money. “As you can see, I'm quite short,” he said. “It was difficult to get major roles. I still have dreams about acting, but I'm content with singing here for now.”
He doesn’t collect any money from these subway performances. So he works nightclubs to pay the rent. “It might seem ironic but I suffer from stage fright and I’m very shy.” The busking is a way of overcoming his nerves about performing and pursuing his dreams of becoming an actor and a musician, he said.
Throughout Gong’s one-hour set, old couples clapped and children holding their mother’s hands danced. Some people in the crowd shouted out requests, mostly for trot, songs from a bygone era. “Personally, I like to listen to soft rock like Air Supply, but in the subway I mostly play requests, and many are for trot, but I don’t mind that either,” he said.
He has his bad days. “I hear comments sometimes, like ‘Oh, you’re such a bad singer, that’s why you sing here’ and that hurts.” But Gong takes comfort in small gestures. A stranger recently approached him when he was performing in Dongdaemun Station. “She was crying and said her daughter had run away from home. She told me that she felt a bit better after I sang her request.”
Even when half-sozzled drunks try to disrupt his act or when the bitter December cold shrouds the station, Gong remains every bit the professional, addressing his audience with a soft voice and doing his best to meet their requests.