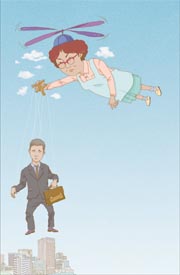 Sometimes in life too much can be as bad as too little. A classic example? Korea’s so-called “helicopter parents.”
That term refers to parents who hover over the telephone and micromanage their children’s social, academic and domestic lives. From kindergarten to college to careers, helicopter parents, mostly moms, swirl above, constantly watching over their offspring.
“Cheering by parents is necessary because it provides a level of comfort and confidence to children,” says Bae Han-ah, 26, a homeroom teacher of 35 teenagers in Mok-dong, western Seoul. “But too much contact and interference can be detrimental.”
The term helicopter parents originated in the United States media in the 1990s. But it is a new word in Korea that appeared recently, emerging with the nation’s economic development, lower birthrate and the growing number of well-educated parents.
“In the past, there were many children to look after,” said Sohn Seok-han, a psychiatrist at Yonsei Clinic of Psychiatry in southern Seoul. “Parents had limited time to spend with each child. The phenomenon [of helicopter parents] is a result of parents’ over-protectiveness as life gradually improved with more money and more time.”
It’s kind of like overbearing “Little League” parents in the West, who badger coaches if their kid doesn’t get to play enough. And it’s not a new trend.
Sohn says the Western concept of meddling parents has a connection to ancient Korean terms. For example, the Korean words chimatbaram, or female influence, and chonji, or bribery, show that the concept has been part of Asian culture for generations.
According to Sohn, there are three types of parents - helicopter parents, bulldozer parents and consultant parents.
Bulldozer parents are strict and orderly and push children with their own set of rules. Consultant parents, on the other hand, listen and give appropriate advice.
The current buzzword is helicopter parent, those who fly overhead, directing traffic, calling the shots.
“The term isn’t an officially adopted academic word, so there hasn’t been much scientific study or research,” Sohn said. “But it is an expression that reflects today’s parental inclination.”
Bae agrees.
She’s seen it in two 15-year-old students who are constantly watched over by their helicopter moms.
One is a smart and clever girl. Her day begins and ends with her mother. The mother’s involvement in her life is made more extreme with the ever-present cell phone.
Bae observed that the mother drops her daughter off at school and picks her up later. Other students attend school with friends, Bae says.
Between classes the mother calls constantly to check on her. When the bell rings to end the school day, the mother calls her again, confirming that she will return home immediately to get ready for hagwon, or private institute. Her dad also takes his turn in the helicopter pilot seat, driving her to the hagwon everyday. 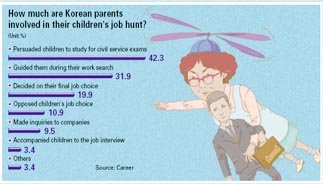 “The girl has no time to herself or time to play with friends her own age,” Bae said. “She is trapped inside the world of her parents.”
Although the teacher said the girl is very talented, it is impossible for her to develop her good qualities. In fact, “Too much interference has changed the girl’s character,” Bae said.
“During the year, she has become inattentive and disobedient. Her grades dropped and she had difficulty making friends.
“But her parents don’t know they are overdoing it,” Bae said.
Bae also observed a male student who is preparing for a foreign language high school entrance exam. Since he is intelligent and has potential, Bae is sure he will pass the exam. But his mom is leaving nothing to chance.
“His mother’s overeager attitude naturally makes the boy rely too much on her for everything,” Bae said.
Case in point ― the boy is in middle school, his mom still selects his clothes everyday. She coordinates him from head to toe.
“He now takes this extreme parental care for granted,” Bae said.
As a psychiatrist, Sohn’s clinical experience and research shows that with helicopter parents around, kids become overly dependent and lack social skills and motivation. “When they grow up, they will lack independence and personal liberty,” Sohn said.
Helicopter parents are not limited to teenagers. They fly overhead even for some university students or career professionals. A group of adults in their 20s or 30s who rely on their parents for money are classified as the “Mother and Father” fund. These so-called adults frequently ask their parents, “Which TV brand should I buy?” or “Mom, where should we go for dinner?”
“They [helicopter kids] discuss matters with parents that should be discussed with their wives or husbands,” Sohn said.
In an April survey organized by Career, a recruiting portal site, 49.6 percent of 1,700 job-seekers in their 20s said parental influence or involvement is critical when applying for a job.
“The survey showed that about seven out of 10 job seekers have helicopter parents,” said Moon Ji-young, an official at Career.
In another poll of 618 new job recruits who are under 27, 41.4 percent said they have consulted with their parents about their jobs and 44.3 percent said their parents manage their finances.
The fleet of helicopter parents is flying everywhere - including universities.
Last year, the Division of International Studies at Ewha Womans University held its first Parent’s Day, intended to bridge the culture and generation gap between moms and daughters. It was a big hit. Some 50 parents showed up and most were satisfied. Parents had one-on-one talks with professors, discussing their children’s behavior, grades and future plans. One parent who participated said, “We’re our children’s everlasting friend and coach. There is no end to caring.”
Not all were happy.
Sohn Kyung-ji, 24, whose parents were invited but didn’t attend, said, “College is a time when we need to learn to navigate the world as adults. We’re no longer kids ― the bumps in life’s road should be dealt with on our own.”
The event was canceled this year due to administrative matters, but Lee Jung-hee, the coordinator, said, “Students and parents have shown growing interest and the event will resume next year.”
Said Bae: “Parenting and child rearing is difficult. Most parents are driven by emotion and have a seat-of-the-pants approach. Caring is needed, but parents should drop the idea of having full responsibility for educating their children.”
Bae said public and private institutions should establish training sessions for parents on education and life skills.