Is it an elephant? Is it Jesus? No, it’s street art

Is it an elephant? Is it Jesus? No, it’s street art

The streets of Seoul are both dangerous and inspiring, says So Su-young, 31, a resident artist in the Cheonggye Stream area.
“The streets are an open space for me and an outlet for my creativity to take flight. I become more aware of what I am doing when I’m outside rather than when I’m in a dusty little studio,” she says.
This kind of work is less secure than her former job as a multimedia designer at a lucrative design company, but So has no regrets. She decided to go out to the Cheonggye Stream two years ago. 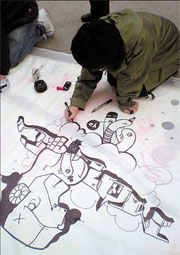 Her caricatures of people, animals and buildings from today’s world are drawn in a slightly abstract way, muddying their exact identity.
You have to offer your own interpretation to really understand what her art is about. This means that the element of chance plays an important role in her work. “Passersby make comments like, ‘Oh, that’s an elephant’ or ‘That looks like Jesus,’ when in fact they are just lines drawn in a certain way. It’s interesting how people take things in, all in their own way,” she said.

So said Korea’s street entertainment scene is not very big, unlike in Europe where there’s often tension between local governments and street performers. But she feels that this is the perfect time for Korean street artists to get themselves heard and seen, and for the public to encourage more artists to come out. “Subcultures in Korea are just starting to blossom and I hope they’re not stunted by regulations set by the government.”
So doesn't perform in winter due to the cold weather, but says she’ll resume in the spring. 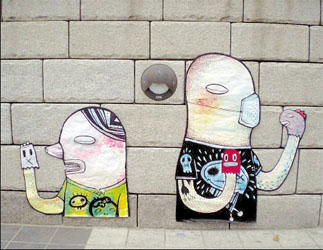