Shy guy hides behind puppets to tell his tales

Shy guy hides behind puppets to tell his tales 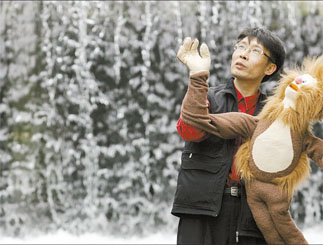 Yun Young-un, head of Parannavi Puppet Performance Missionary and a street performer, says he feels more comfortable when he talks through his puppets than when he addresses a person face to face. “I am extremely shy,” he said. His voice was hardly audible. But as he started to perform with his eagle puppet, which he made himself using real feathers, his voice soared above the soft, quivering tones from moments ago, and he even cracked some jokes. Hidden behind the handsome black and white puppet, Yun was a man transformed, reaching out to passersby, encouraging them to touch the puppets and regaling his audience with tales.
Yun wanted to become a priest after he finished college, but his timid personality was an obstacle. “I took up puppeteering to conquer my fear of public speaking,” he said. While studying for the priesthood, he began to get involved in volunteer programs with children. “I found that children were more responsive and concentrated better when a puppet is talking,” he said.
He took his puppets outside for the first time three years ago when the Cheonggye Stream reopened and auditions were held to select artists and musicians to perform there regularly. “I wanted to reach adults through puppets. My performances last as long as 50 minutes and I tell classic fables that have a philosophical edge for people of all ages,” he said. The eagle puppet symbolizes hope, he said.
Yun sometimes performs at Cheonggye Stream with his son, a middle school student.
“It’s tough to get onto the Cheonggye Stream list of artists. I haven’t encountered anyone who is disrespectful. And my son really enjoys performing with me,” he said.