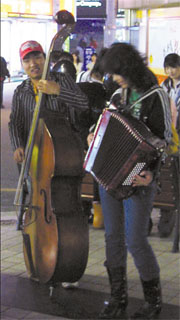 The bustling alleyways and dimly-lit corners around Hongdae are full of untold stories. Not many know them as well as the Cabinet Singalongs, a four-piece band that has played these streets for three years, come rain or shine.
“Shall we listen to the street performers and the stories of the people walking along the boulevard?” they sing in “The People We Met on the Street,” a single from their first album, “Little Fanfare,” which was released last year.
“An aged rocker seems tired of playing and misses the stage,” they continue. “A couple go into a club, knowing it’s past their time to go home. A crowd of young people criss-cross in front of the central plaza, behind the shadow of an old man carrying a handcart.”
The foursome formed in 2004. “We were friends and after playing a couple of times at each other’s houses, we thought it would be fun to put together a band,” said guitarist Kim Mok-in, 28.

The uninhibited nature of the band extends to their attitude about music. Although they play at clubs and festivals, and debuted an album in 2006 through the relatively well-known indie label, Cavare Sounds, they have been stubborn about performing on the streets from the start of their careers.
“We do it by choice because we want to be a part of that great tradition of street musicians who have integrity and self-awareness about who they are as musicians, no matter where they perform,” said accordion player Cha Ji-eun, 28.
“There is this performer in Daehangno who has performed at the same spot for over 19 years,” Cha says. “I get a sense of awe every time I see him. He seems to have a clear sense of purpose, like ‘This is my street and I’m going to play the best I can to entertain these people.’”

When Cha plays on the street, he said there is a certain fluidity and natural flow to the music, which can’t be replicated at a proper venue. “You can leave if you don’t like our music and you can stay if you do. I especially love stations and airports. It feels surreal when I play there, where everyone is busy going someplace else.”
The most they’ve ever made in one street performance is $100 or so, but they don’t play for the money. “With the cash we collect from our street performances, we go on trips and see street performers in places like the Hotel de Ville street in France or Copenhagen,” Kim said.