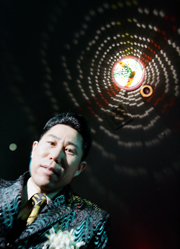 Singer Kim Yong-gu has been performing in nightclubs and at special functions for many years, and he feels he knows how to solve the problems facing poor people in Korea today. By Kang Uk-hyun

‘I wish the current presidential contenders would stop the mudslinging. The president should be a parent figure. What can we learn from candidates if all they do is bicker?’
Kim Yong-gu has a dream. He may be just a humble nightclub singer in suburban Seoul with not much to call his own, but he still wants to make the world a better place.
That’s why he decided to run for president this year.
“There is something terribly wrong with this society and the world today,” said Kim, 49, wearing a snazzy silver-lined velvet jacket and a fake rose in his buttonhole.
“Money rules and has full command over people. College kids kiss and hug in public like on the subways, which is wrong,” he said, adjusting a microphone on stage during rehearsals.
Kim was taking time off last Wednesday at a nightclub called Party Party in Incheon, west of Seoul. He also works at the White House nightclub in Gwangmyeong City, Gyeonggi. It was his dream to leap from the White House to the Blue House, but the wall of reality proved too formidable.
Kim has a lot of complaints about money. Cash, or a lack of it, blocked his road to the Blue House because he couldn’t stump up the 500 million won ($537,000) deposit needed to register as a candidate.
He registered as a preliminary presidential candidate with the National Election Commission and he tried hard to find the 500 million won with the help of four sponsors. But the deposit deadline on Nov. 26 came and went.
“My heart was torn apart. I couldn’t run because of money,” Kim said. “But I can’t blame anyone but myself. I learned a valuable lesson this year, and I will do better in the 2012 presidential election.”
He still has a pile of business cards left over that define him as an independent presidential candidate and he retains two bank accounts for donations.
The business cards describe him as a member of the Korea Entertainment Artist Association.
Kim was not the only candidate whose presidential dreams foundered because of a shortage of money. In this year’s election, 128 men and 15 women registered as preliminary candidates with the National Election Commission.
There were other singers like Kim, taxi drivers, artists, cleaners, construction workers and several without jobs at all.
A National Election Commission official, who declined to be named citing agency rules, said every five years during the presidential elections a flood of hopefuls join the race. It was a kind of “ritual,” the source said.
Most failed to raise the 500 million won deposit, and currently there are just 10 candidates vying for the Dec. 19 election.
However, several minor contenders managed to raise the deposit. One is Huh Kyung-young, candidate No. 8. Huh is making headlines these days for his radical campaign pledges, such as giving 50 million won to anyone who gets married and 30 million won to those who have babies.
Huh claims to have an IQ of 430.
Choi Jin, who runs the Institute of Presidential Leadership, said the current Roh Moo-hyun administration encouraged the public to run for president.
“In the past, presidential candidates were special people like democracy fighters, but now people tend to think that anyone can be president,” said Choi, who served in the Blue House under former President Kim Dae-jung.
Choi doesn’t see the ever-hopeful minor contenders as a problem but as a step toward a mature democracy.
Meanwhile, Kim Il-gu, a synthesizer player who first met Kim Yong-gu last Wednesday, said, “I am sorry that he [Kim Yong-gu] couldn’t run. If he had, he’d have got at least two votes ― one from me and one from himself.”
But Kim Il-gu added that a person like Kim Yong-gu knows exactly what life is like for people clinging to the lowest rungs of society.
Kim Sun-hee, a middle-aged waitress at the nightclub, agreed that Kim would make a fine candidate for those very reasons. 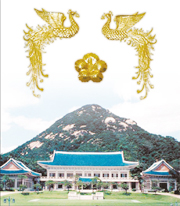 “I guess anybody can run for president. Politicians are only human after all,” she said, although she isn’t interested in running herself.
Gracious in defeat, Kim now wishes the best for his would-be rivals still in the race.
“I want to see every single one of them win and then take turns in office,” Kim said. “After all, it’s best to see everyone happy.”
Kim said he will cast his vote this coming Wednesday, although he won’t reveal who for.
But in his heart, he thinks he is the best “people’s” candidate for president. His profession has taken him all over the country and put him in touch with people from all different backgrounds. As a singer, he has notched up many seasons entertaining audiences at nightclubs and on special occasions like birthday parties and regional events. He has clocked up thousands of kilometers as he travels the length of the country, and the biggest lesson he has learned is that people on the bottom rungs led tough lives.
“There are just too many people working from dawn to dusk, and yet they can never save up enough to buy their own home,” Kim said.
Kim is speaking for himself here. He lives alone and his income is unstable. He only charges about 100,000 won for birthday parties and he earns less than a million won a month. He blames the slow economy.
Home is a small room in Suyu-dong, northern Seoul, but when he cannot afford the monthly rent, he lodges in cheap motels.
“I know my life is not much, but I have taken pride in myself for living frugally, faithfully and passionately,” Kim said.
“But I’m left with nothing, so there must be something wrong with the social structure,” he said.
A high school graduate, Kim is well aware that his resume is not as flashy as those of the other contenders. But he hasn’t lost hope.
“I know the lives of real working people very well, and I know how to improve them,” he said.
Not surprisingly, his policies concern the working classes. He wants subways to run for longer, starting at 4 a.m., instead of the current 5:30 a.m., and he wants one or two subway cars reserved for senior citizens.
Another priority is education. “Education is the key to unlocking Korea’s true potential,” Kim said. Education at schools and homes should be stricter if society wants children to get what Kim calls a proper education, he said.
Most importantly, however, he wants to build a society where everyone owns their own house. To do so, he wants to raise taxes for people who possess more than two houses and distribute the money to the have-nots.
He strongly endorses the need to reduce taxes for the less wealthy. “If not, the working classes will end up dying of hunger on the streets,” Kim said.
Judging by the strength and extent of Kim’s convictions, it’s a wonder he isn’t a civil rights activist and only seems set on running for president.
“The president should be a parent figure to the people. A president is the one who should help poor people,” he said by way of explanation.
Kim’s personal life is not a happy story. His wife and 27-year-old daughter left him. They accused him of being more concerned with the rest of society than with his own family.
His mother, meanwhile, didn’t oppose his presidential bid, Kim said, although she told him to make winning back his family his top priority.
Kim adores his mother, but he disagrees. “Everything would be better if I was president,” he said. “I feel it in my heart.”
Then, what does he think of President Roh Moo-hyun? Kim pondered a moment, and then said he is aware of the criticisms aimed at Roh, but he doesn’t agree.
“We elected Roh and so we have to shoulder the responsibility,” he said.
What are his thoughts about leading presidential hopefuls, such as Lee Myung-bak and Chung Dong-young? Kim frowns a little, then said, “I’m not belittling anyone, but I desperately hope that they stop slinging mud at each other. They’re running to become the country’s father figure. What can people learn from them if all they do is bicker?”
Kim is now looking forward to the 2012 election with some excitement. He knows another stab at getting elected won’t be easy, but he said he’s got the passion and integrity to work toward his goal.
“I have no regrets. I’m doing what I choose to do, and I’m proud of my choices, no matter what others say.”