‘D-War’ slithers over to Russia

‘D-War’ slithers over to Russia 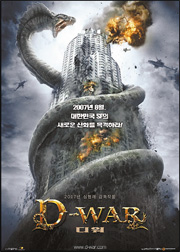 Russia, watch out! The giant serpents that invaded modern-day Los Angeles in “D-War” are set to attack our Eurasian neighbor next week. The big-budget science fiction thriller will open in Russia on Dec. 27. The film grossed $20.3 million within the first five days of its South Korea release, and made $5 million on its opening weekend in North America.
According to local press, a theater in Moscow said D-War will be screened in some 60 Russian theaters, 26 of which are in Moscow, 18 in St. Petersburg, 8 in Yekaterinburg and 8 in Kazan.
As winter vacation begins for Russian students, some anticipate that the film, directed by Shim Hyung-rae, will spark more D-War mania.
“Foreign buyers have been showing great interest in D-War,” Shim said, im media interviews. “Video and remaining copyright issues with other countries will be dealt with early next year.”
The film will also screen in Japan in January and China in February.
Meanwhile, the portal site Daum reported that Korean netizens selected D-War as the year’s most searched entry on the Internet.