[TV review]Sometimes you have to scrap to be heard

[TV review]Sometimes you have to scrap to be heard 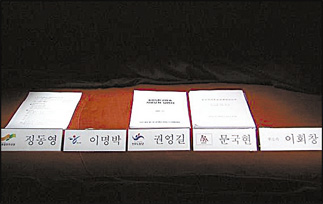 I was once an amicable person ― at least on the surface, before I joined the newspaper club at college.
That’s why I was surprised when I picked a fight one sunny Saturday afternoon with a parking lot employee a few years ago.
My sister had just passed her driving test and we were celebrating with a drive downtown.
As my sister was parking, the parking lot manager approached and got mad for no reason.
“You cannot park here unless you eat at our restaurant,” he yelled, although it was a public parking lot.
I tried to reason with him, but he just glared at me and then uttered a sentence that I really detest: “I’m your father’s age, so you should listen to me.”
Well, he was more like my grandfather’s age.
At that point I flipped, and I bombarded him about my rights as a tax-paying citizen to use the public parking lot.
I also told him that I had every right to pursue happiness and be respected as an equal citizen regardless of age.
I harangued him for half an hour until he fled the scene, defeated. Red in the face, I turned to my sister.
“Sis, you have become quite a fighter now after years at work,” she said.
My excuse was that you sometimes have to be a fighter, especially when you’re a journalist.
I was reminded of this fight when I saw “News Issues Special: Fights” on KBS-TV. The program airs 11:30 p.m. on Mondays.
In the program, reporters with at least 10 years’ experience offer in-depth coverage on current affairs.
The focus is the dark side of the presidential contenders.
The reporters sank their teeth into each candidate, mostly the two major ones ― Lee Myung-bak of Grand National Party and Chung Dong-young of the United New Democratic Party.
They investigated Lee’s real estate scandals and the issue concerning his registering of his daughter, a Juillard graduate, as his janitor, which was alleged to have been a tax dodge.
They also found evidence that Chung supported former President Chun Doo Hwan, the military dictator.
The reporters tracked down the candidates on their campaign trails to seek explanations, only to be refused.
The reporters featured in this program deserve credit for trying to remain true to the title of the program and to continue to enforce the struggle between figures of power in society and the general public.
Society needs people like these reporters to ensure free speech and democracy.
To be honest, Korea is a fun place to be if you’re a fighter and a critic. Just think of last Friday’s scuffle at the National Assembly.
We were treated to a spectacle of middle-aged legislators from all sides of the political spectrum attacking each other, using electric saws, sticks and even a telephone.
It was quite entertaining to see men of my father’s age bicker like children, although the fun factor soon turned to bitterness.
After all, these legislators are supposed to be the people’s representatives, yet they acted like idiots.
Actually, watching TV news itself has provided us with in-depth coverage of the presidential election that finally ends today.
After watching the show, it has become all the more difficult to pick the right candidate for the Blue House for the next five years.
Still, Judgment Day is here. Electing our own leaders is a blessing and a concern.
Now we have to wait and see, and remember that we will have to shoulder the responsibility of whomever we elect.
Luckily, we are not alone in this fight, as we have “Fights” and the team of seasoned newshounds and their sharpened knives ready to dig into scandal and dishonesty.
sujiney@joongang.co.kr