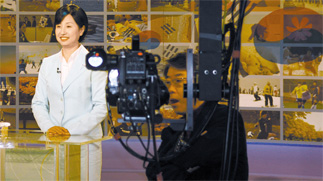 One of Lee Myung-bak’s supporters endorses her candidate during a 15-minute speech on national television. Provided by Lee Myung-bak campaign team

Kim Chang-hyun is determined to drive her 160 cows into the Blue House if Lee Myung-bak wins the election today but fails to revive the economy as he pledged.
Don’t get her wrong. She is not a Lee hater. Quite the opposite, in fact. Kim, 62, a cattle farmer from Eumseong County, North Chungcheong, is very much a Lee enthusiast.
Kim made the cow attack pledge on a recent TV commercial. Lee campaigners hired her to give a speech in support of Lee.
In the commercial, Kim says she is “repulsed” by the way Lee looks, but his “slitty eyes and scrawny body” are not a problem as long as Lee boosts the economy.

“You’re mistaken if you think I’m some crazy middle-aged woman who has lost her mind to Lee,” Kim said in a guttural voice. “Just look at the election posters. Lee Myung-bak looks the least presentable.”
Lee’s campaign team has carefully coordinated her message to ensure maximum public appeal. The message is: Lee is the right candidate for the Blue House, despite his looks.
Kim, who answered the phone during a break from herding cows last Sunday, said, “What I said on television is the truth.” It was the Lee camp that first contacted her, Kim said, after reading about her reputation for environmentally-friendly farming practices. After giving the offer some thought, she grabbed her 12,000-won($13) jacket and sped off to Seoul to give a 15-minute guest speech for Lee on camera.
Kim had seven meetings with Grand National Party campaigners who listened to what she wanted to say and then they devised a script.
The Eumsong County rancher insists that everything she said in her televised speech were her words. In fact, she refused to comply with the party’s demand to read a page of criticism against President Roh Moo-hyun, she said.
“Whether or not Roh has done a good job, he’s still the ruler of this country,” Kim said.
Kim Jung-soo, a poet and scriptwriter in charge of Lee’s TV speeches, said using Kim Chang-hyun was a way of capturing grassroots support.
“And the strategy has worked,” the poet said.
Kim, introduced as “cow granny” for her televised speech, was one of nine guest speakers supporting Lee. The others included an unemployed college graduate, the TV actor Yoo In-chon and Chung Mong-joon, the Korea Football Association president and an influential legislator.
Candidates were allowed a maximum of 30 one-minute TV ads and 12 guest speeches during the official campaign period, which lasted from Nov. 27 to yesterday. Due to financial and other considerations, the candidates couldn’t exploit all these promotional opportunities.
Campaign strategists like Lee Kyung-hoon, assisting Moon Kook-hyun of the Creative Korea Party, are unhappy that it costs 20-30 million won to air a single ad on primetime national television.

For newcomers to the election like Moon, a former corporate chief executive, this expensive system is “irrational and unfair,” he said.
Lee Kyung-hoon is all the more embittered because he is aware of the power of TV commercials, such as the infamous ad run during the 1964 presidential campaign in the United States that helped Lyndon B. Johnson win.
The ad featured a girl plucking petals off a daisy and a countdown to a nuclear explosion. “These are the stakes.... We must either love each other, or we must die,” a voiceover from Johnson says as a mushroom cloud envelopes the screen.
Lee, meanwhile, has more vivid memories of Korea’s 2002 election in which President Roh turned the tide of popular support in his favor with emotional advertisements.
In one, Roh played the guitar and wept, creating a stir among voters. Lee, who was partly involved in the Roh campaign, firmly believes that this campaign strategy was a key factor behind Roh’s victory.
With a limited budget, Lee says he has devised a couple of advertisements for this year’s election, including one in which a college student talks of his hopes to make Moon the “first president truly from the heart.”
However, Lee says he could have done better if there had been a more generous budget.
Meanwhile, Lee Myung-bak’s ads focus on the state of the economy. The front-runner has repeated the same message throughout: to “answer the prayers of the public and revive the economy,” according to Park Sung-ha, one of five veteran admen working for Lee’s campaign.
Park, headhunted to join Lee’s campaign, worked for the major advertising agency Cheil Communications for many years. After “dozens of sleepless nights” and “some 240 tentative plans,” Park and his team came up with seven ads in total. They have been a success because they got the public’s attention and became a major topic of discussion, Park claimed.
The first features a no-frills restaurant run by an elderly woman well known for cursing at customers.
In the 90-second advertisement, the “cursing granny” growls at Lee, saying “politicians do nothing but fight.” Then she yells, “Eat more, you bum” and “Make sure you get the economy going again.”
Then a soft spoken female voiceover is heard to say, “Lee Myung-bak is always hungry. He has no time for a decent meal because he’s thinking about how to build a society in which everyone succeeds.”

In another advertisement, Lee cries when he meets a group of street vendors who urge him to come to their rescue.
Park, the campaign strategist, said his team picked up ideas during the Lee campaign trail. This “rescue” episode happened during Lee’s visit to a market in Daegu, Park said.
Park cautiously endorses the success of his advertisements, citing a recent phone call from a columnist at an anti-Lee newspaper whom Park quoted as saying, “Watching Lee’s TV commercials, I knew in my heart that the game’s over. Lee will win, thanks to them.”
Park said, “Our strategy to appeal to the public with sensitivity worked.”
Kim Chun-sik, a professor of political communication at Hankuk University of Foreign Studies, takes note of this “emotional appeal” strategy. The teary formula, which started with the 2002 campaign initiated by President Roh, has become a classic political campaign strategy, Kim said.
“Every single candidate speaks against the Roh administration, but they have all inherited his campaign strategies,” Kim said. “Almost every candidate weeps a little and makes emotional appeals to the voters.”
Kim said that details of campaign pledges and policies are largely lost in TV ads.
“Advertisements, after all, are about creating an image and a fantasy, and campaigners are trying to make ads that ‘sell’ their candidates,” he added.
Whang Sang-min, a professor of psychology at Yonsei University, is highly critical of the campaign strategies, calling them “trite.”
“You don’t have to be an expert in psychology to see that these campaigns lack imagination,” Whang thundered. Describing the campaign advertisements as “boring and lazy,” Whang said, “I wonder if the strategists have ever tried to really understand their candidates’ pledges and promote them properly.”
Whang said the current election campaign ads are like “people who are too lazy to find their own styles and just rely on luxury-brand goods.” He dismisses overreliance on the hackneyed formula of emotional appeals.
“Been there, heard that. It’s boring,” Whang said.
Some candidates like Kwon Young-ghil of the far-left Democratic Labor Party are staying clear of this approach. Lee Sang-hyun, Kwon’s leading publicist, said candidates who opted for emotionally charged ads were simply trying to cover up their inability to be a good president.
Lee’s strategy for the candidate Kwon was a “frontal attack.” Only able to produce three TV ads, Kwon was seen strongly endorsing pledges that support irregular workers and other policies.
However, Kim Chun-sik of Hankuk University also belittles Kwon’s ads, calling them “boring.”

The Hankuk University academic is intrigued by the ads of one of the front-runners, Chung Dong-young, which he said are “studded with negativity.”
From newspaper to TV advertisements, according to Kim Chun-sik, most of Chung’s ads are focused on denouncing Lee Myung-bak’s morality with regard to BBK, a financial firm entangled in fraud allegations. The day after the public prosecutors’ office cleared Lee of any BBK-related allegations, the Chung camp ran a TV ad with the background music of a pop song titled “It’s a Lie.”
Chung’s newspaper ad also features photographs of Lee wearing camouflage during a visit to an army base. “Camouflage is what Lee Myung-bak is good at,” the ad states.
Professor Kim is well aware of the effect and the long history of negative ad campaigns, and he points out that the strategy developed by the Chung camp lacks hard facts and logic.
He cited the senior George Bush’s campaign pledge in 1988 as an example of an effective negative campaign. The Bush camp ran an advertisement against Michael Dukakis in which men in prison uniforms took turns exiting through a revolving door. The point was to highlight concerns about Dukakis’s decision as governor of Massachusetts to let convicted felon Willie Horton take a weekend break from a life sentence. During that break, known as a furlough, Horton committed armed robbery and rape.
“At least Bush’s negative campaign made sense and was based on facts. Chung’s campaign, on the other hand, just makes emotional claims,” Kim explained.
Kim Kyo-heung, legislator for the United New Democratic Party in charge of the party’s TV ads, said their commercials were “just aimed at raising awareness about the leading candidate’s problems and the accusations that he is a liar.”
He added that his camp has also come up with “new approaches” to TV advertisements, using hip-hop dance and the “Free Hug” movement.
Meanwhile, as the weeks-long election campaign drew to a close yesterday and campaigners began mumbling prayers for victory, voters like Kim Chang-hyun, the rancher from North Chungcheong, prepared to exercise their democratic right to vote.
Whether or not Kim has to cajole her cattle into making a trip to the Blue House may be one of the more interesting outcomes of this presidential race.