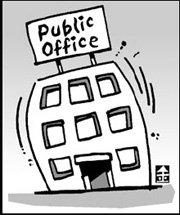 The British Colonial Office increased its staff from 372 in 1935 to 1,661 during a span of two decades. Many colonies became independent in the 20 years after World War II, and the colonial office may not have needed to be as big. However, it grew four times in number.
Previously, after World War I, Britain halved the number of its Navy vessels and staff, whereas the number of the staff members at the Naval Office doubled. A public organization, once born, tends not to be removed easily. This is known as Parkinson’s Law, which is derived from historical data.
If we look around, many young officials are indeed highly able and hold strong beliefs. However, the longer they work for a public office, the more likely it is that even the motivated people will become idle and the reasonable ones will get more stubborn.
The maxims held by great presidents give us warnings about the ruling trap. Abraham Lincoln said few people are good enough to rule others, while Charles de Gaulle asked who would dare to rule a country with 246 different kinds of cheese.
Public servants are expected to learn ethics by taking an oath of office. Government officials call themselves servants of the people. However, anyone who has ever tried to get service from the government with just a simple signature can easily understand that the idea of a public servant is fiction, which is harder to find than reality.
China has embarked on a march to make its government smaller. By next March, they aim to integrate or abolish 28 departments in the government.
President Hu Jintao gave his full support to the project, which reduces a far greater number of departments than the United States or Japan ever did -- the U.S. cut the size of 13 departments; Japan, 12. Since China has a strong tradition of absolute monarchy, the idea of a smaller government sounds fresher than ever. China’s government has successfully led the country’s economic development since Deng Xiaoping, and now they are going to surpass us in terms of public reform as well, even though we are unsure of our own direction.
Even at this moment, the Korean government is growing in size. By 2010, the number of government officials will reach 1 million.
Voters who are not sure whom to choose due to the independent counsel and so forth should read the promises for a smaller government made by each candidate before they go to the polls today. Instead of noisy promises to do everything, you should look at who offers a practicable promise of what “not” to do.