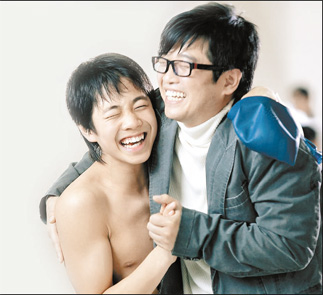 Entertainer Lee Sang-wu has performed with some of the greats of the Korean acting and singing world, but perhaps his most fulfilling role has been acting with his son in a TV commercial.
Lee, 44, has been in the public eye ever since he burst on the scene as a boyish balladeer in the late 1980s. Since then he’s acted in several movies, and in 2001 he set up his own entertainment company, Wonup Entertainment, which has signed movie actress Han Ga-in and Korean pop singers Jang Na-ra and Hwiseong.
But these days his relationship with his son has caught the media spotlight. Despite developmental disabilities, his son, Seung-hun, 13, came first in a 50-meter race at the Gyeonggi Swim Competition and fourth in the Kkumnamu National Swim Competition.
“We found out Seung-hun had developmental disabilities when he was almost 3. After I found out I just got drunk for three months, but my wife coped better. She focused on the future and immediately looked to enrol Seung-hun in special schools. When he was 7, my wife encouraged him to take up swimming,” Lee said.
“Our family has never thought of Seung-hun as being unfortunate because he is such a positive, happy boy. I’m so proud of him competing with all the regular kids,” Lee added.
Their story was featured on KBS-2 TV’s “Human Theater” in September and it touched the hearts of viewers across the country. Lee and his son will also star in a TV commercial for sports-related lottery company, Sports Toto. In the ad, Seung-hun is seen getting anxious at a swim meet because his dad has been delayed by work. When his dad shows up, forming a heart shape with his arms, Seung-hun relaxes and finishes the race. The ad ends with Lee giving Seung-hun a hug, saying “You’re always number one in my book.”
“Seung-hun is like my life teacher. Through him, I’ve learned what it is to love, and my wife and I have gotten much closer,” Lee said.
Lee is also planning on writing a children’s book as well as two essays about his son. He says he’ll include episodes like the time when Seung-hun first competed in a swim competition or when he finished singing “Twinkle, Twinkle, Little Star” at age four and the whole family cried.
“I want to give a ray of hope to families faced with similar problems. I’ve been so moved when parents of kids with developmental disabilities came up to me after seeing Human Theater and said they felt encouraged after seeing my family go through the same hardships,” Lee said.
From early next year, Lee is embarking on a series of concerts to raise money for special education centers for children with developmental problems. Big-name stars including SG Wannabe, Big Mama, Sim Su-bong and The Yun Do-hyun Band Children will perform, and children with disabilities will get discounted tickets.
There are over 50,000 children in Korea with developmental disabilities, but the social welfare system is very poor, Lee said
“I’ll be very happy if Seung-hun volunteers for these programs in the future,” Lee said.