[Review]It’s a long way to ‘Narnia’ from here

[Review]It’s a long way to ‘Narnia’ from here 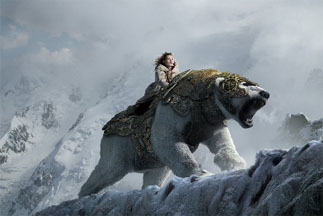 A couple of weeks ago, I logged onto Facebook, the popular social networking Web site, to find that a couple of my friends had joined a group called “Do NOT support ‘The Golden Compass.’”
Curious, I clicked on the group to check it out. From the ads I’d seen around town, I figured that “The Golden Compass” was some innocuous kids’ movie about polar bears wearing armor. What could anyone have against a polar bear wearing armor, aside from being unable to pet it?
Well, as the group description said, this movie was based on a series of books by “atheist Philip Pullman” in which kids “kill God so they can do as they please.” The group leader wrote that the movie is “designed to be very attractive in the hope ... that the children will want the books for Christmas.”
Yeah, whatever.
So I may think this religiously overzealous Facebook group and its ensuing boycott campaign are a load of rubbish, but that doesn’t mean I think everyone should run out and see this movie, either.
The problem is that I can’t really hammer down a distinct audience for this film. Like the “Chronicles of Narnia,” The Golden Compass features similar stunning special effects (far better than the below-par “Beowulf,” I must add) and fantastical talking animals. However, Narnia beats The Golden Compass in name recognition and plain old-fashioned charm.
I’d like to think that as a voracious bookworm in my youth, I have a pretty good grasp of the children’s classics out there. But I’d never heard of Pullman or his books before New Line’s promotion of this film began. I think the reason Pullman’s trilogy, known as “His Dark Materials,” isn’t better known is because frankly, it’s just not as compelling. It pales in comparison to Narnia or the more contemporary “Harry Potter” series. Therefore, I doubt it’ll have the same number of rabid fans flocking to theaters.
Then there are the characters. Lyra Bellacqua, the young, spunky star of the movie played by Dakota Blue Richards, is adorable. (As an added bit of humor, the hangul subtitles rename poor Lyra as “Rara.”)
An orphan who has a habit of getting into trouble, Lyra is just the kind of courageous little troublemaker who could weasel her way into anyone’s heart. Appropriately, Lyra’s “daemon,” an animal counterpart meant to embody her soul, is often in the form of a wily little ferret. (In Lyra’s world, while adults’ daemons are fixed, children’s daemons can change form until the child matures.)
Lyra may be quite winsome, but one great kid can’t match up against far too many adults. Yes, some of them are wonderfully talented, like Daniel Craig and the immaculately beautiful Nicole Kidman, but this is a kid’s movie.
In Narnia, the only adult with real screen time is the fearsome Tilda Swinton as the White Witch. The rest of the film is appropriately filled with the Pevensie children’s travails with their furry friends. No kid is going to care to keep track of all the adults in The Golden Compass.
In the same vein, with a kid protagonist who scoffs in the face of adult authority, few adults will be able to appreciate this film. The result is a weird straddling between the kid and adult worlds ― something Lyra, not the actual film, should experience.
Both kids and adults will be able to share their displeasure with the ending of this film. When the first few bars of “Lyra,” the cheesy ending song by Kate Bush, began to fill my theater, I wanted to scream at the screen, “That’s it?!”
In a cheap setup to a sequel, the film’s action ends completely unresolved, with Lyra merely saying something to the extent of, “But our adventure isn’t over yet.” Cheap, cheap, cheap... and lazy.
But I can say this on behalf of The Golden Compass ― it makes me really want a daemon of my own (or maybe just a puppy).
The animators rendered the animals gorgeously, from each glistening fiber of fur to the perfect gait of a polar bear.
Oh, and for those concerned about the theology of His Dark Materials, rest assured, there is nothing in The Golden Compass that would make anyone question God... except for why he allowed this movie to be made in the first place.