Picture-perfect, any time of year

Picture-perfect, any time of year 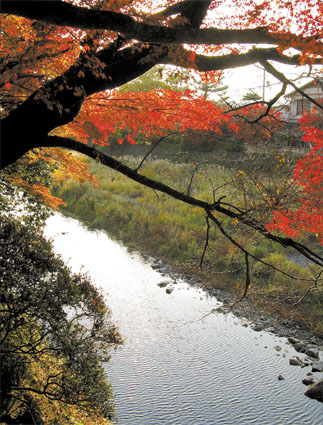 A view overlooking a stream from one of the traditional Japanese inns in Kyoto. By Chun Su-jin

KYOTO ― As you enter Saikyoji Temple, the first sound you hear is the strike of a gong, a meditative call that fills the temple grounds.
Taebe, in her 80s, spends her days striking the gong. She asks visitors to shake hands with her, and they are surprised by the strength in her wrinkled hand.
“It took me 10 years to find the right bell tone, and this strength is a bonus,” she says with a smile.
This small temple, ablaze with autumnal colors, is a sanctuary for a Japanese friend of mine. She retreats here whenever she feels vulnerable and in need of comfort.
Her husband died after several years of happy marriage, and Mama, a beautiful woman in her 40s, is used to driving here, listening to the gong and reflecting on life. 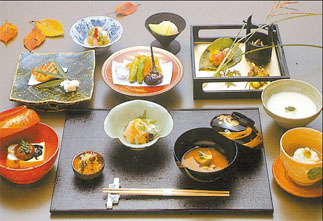 After hearing Mama’s story, Taebe said, “My dear, you’re such a beautiful person. Now that you’ve tasted life’s bitterness, all that’s left is for you to be happy.”
Only when you have tasted unhappiness can you can truly appreciate happiness, Taebe said, words that left Mama and me in a thoughtful mood.
Taebe is not the only reason to visit Saikyoji Temple, a 20-minute drive from northern Kyoto. This ancient capital is radiant every season with its millennia-old beauty and history, but autumn is the season that lures the largest number of tourists. They come from Japan and all over the world to see the patchwork of red, yellow and gold embroidered on the surrounding trees.
That autumnal beauty is withering now, according to my friend, but the sere beauty of a stark winter landscape is taking its place.
The last time I came here was January, and a blanket of snow lay in pure white layers on the centuries-old temples.
I’ve visited Kyoto three times and each time I come I feel fortunate. Kyoto has this power over me and I always write about its beauty.
There are things about Japan I can agree with, and aspects I disagree with, but it would be churlish of me to deny that the culture and natural beauty charm me.
This trip was no exception. Watching the golden rays of sunshine fall on Gotoin and Tofukuji temples in central Kyoto, I thought I could die happily now. I’ve seen the utmost beauty that the Earth can offer, so I would have no regrets.
At least so I thought. For a moment, I even considered relocating to Kyoto, especially after witnessing the patience of the people of Kyoto as I asked for directions and their farewell bows, saying, “Please take care.”
Still, traveling and living are very different, and I’d like to leave Kyoto as a place of dream-like travel. 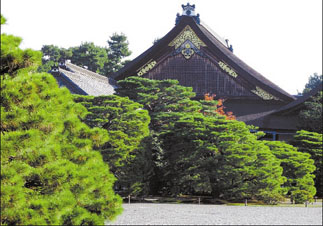 Kyoto Imperial Palace, where the emperors of Japan resided until 1869. By Chun Su-jin

For first-timers to Kyoto, there are several must-see spots. You have to pray for longevity at the Kiyomizudera Temple, appreciate the aesthetics of the lovingly designed Kinkakuji Temple and free yourself from worry in the gardens of Ginkakuji Temple and nearby Philosophers Path, lined by cherry trees and a stream.
These are only a few examples of what’s on offer, and it takes at least five days to take in all that Kyoto has to offer. But it was time for me to discover a new side.
A new lesson I learned on this trip is that you don’t have to spend time at the major spots to enjoy Kyoto’s attractions.
Everywhere you look there are photo opportunities, and even the most amateur photographer can produce superb pictures. The trees grow at picture-perfect angles, and the streams and mountains are positioned as if posed for the camera.
I took advice from a Kyoto friend who is a professional gardener and visited several smaller temples and celebrated gardens on this trip. The Saikyoji Temple, where Taebe rings her bell, was his recommendation.
His other recommendations included Gotoin, a branch temple of the Daitokuji Zen Temple, which can be easily reached by subway from central Kyoto. First, go to Kitaoji Station, and you can either walk about 15 minutes or take a five-minute taxi ride.
Japanese gardens are famous for their minutely calculated designs and symbols. A rock means God and the center, and a field of sand means the sea.
Gotoin, meanwhile, is famed for its serenity and carefully placed trees, bamboo, moss and rocks.
To reach the entrance, I took a narrow path of granite rocks. Admission costs 400 yen ($3.50), and it’s an extra 500 yen for a cup of green powder tea and some rice cakes.
I drank my tea and ate my cake while sitting on the open deck facing the garden. All I could hear were birds chirping and leaves rustling in the wind.
The history of Daitokuji Zen Temple is closely entwined with the Japanese tea master Sen no Rikyu, the 16th century master of tea.
The other visitors were mainly Japanese. One couple was wearing kimono, traditional Japanese clothes. I wanted to take their picture, the kimono being so striking in appearance. But I decided against it when I saw them demurely kiss each other on the lips. 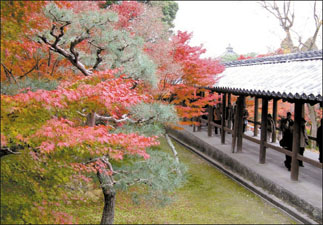 Kyoto is famed for its pine and maple trees. By Chun Su-jin

It’s rare for Japanese lovers to express affection in public, and I didn’t want to intrude on their precious time.
Visitors may want to keep in mind that early birds have the upper hand in Kyoto. Temples and gardens usually open from 8 a.m. and close in the afternoon, around 4:30 p.m., especially in winter.
Another recommendation are the imperial palaces and gardens in Kyoto. Advance reservations are a must.
These sites fall under the stern management of the state Imperial Household Agency. For your convenience, reservations can be made online at www.kunaicho.go.jp, in English.
Admission is free, if you succeed in making reservations amid the stiff competition.
After an unforgettable trip to the Shugakuin Royal Villa last spring, I visited Kyoto Imperial Palace, the official home of the Japanese emperors until 1869.
The Shugakuin Royal Villa is venerated for its buildings and the garden where emperors of Japan used to rest while sipping tea.
It was established in the mid-17th century and boasts majestic pine trees, ponds and teahouses, which the emperors built for their princesses.
There is a section in the gardens where you have to ascend for 10 minutes along a narrow trail surrounded by dwarf pine trees, and when you reach a certain point, look back for a breathtaking view of the garden.
The tour to Shugakuin was why I decided to study Japanese harder, because there was only an audio guide for the tours there, and I was 100 percent sure that the Japanese guide was giving further anecdotes and stories.
The Kyoto Gosho, or imperial palace, is a different story, as it offers tour guides in English. But you don’t need a guide to appreciate natural beauty.
Another suggestion would be to see Tofukuji Temple, whose long corridors and promenade paths offer panoramic views of the trees, pond and skyline.
And if you’re planning to travel to Kyoto next autumn, you should visit Eikando, another Zen temple famed for its nightscape.
Kyoto is celebrated for its diversity of vegetables and dishes. If you’re on a tight budget and don’t have much time, avoid McDonald’s and go to Nishiki Market near the giant Kyoto Station.

The restaurants serve obanzai, a collection of Kyoto side dishes, and nisshin soba, noodles with sardines boiled in soybean sauce.
If you want a real treat, I’d recommend staying at traditional ryokan, posh Japanese inns with centuries of history.
Some ryokan are known for their picky selection of customers, but the one that I stayed in near Mama’s house in northern Kyoto, Heihachi Chaya, (81) 75-781-5008), is not, luckily.
I was surprised by the size of the rooms and the seasonal dishes. The gourmet course of kaiseki was a little costly at 8,000 yen but it was worth it.
This ryokan is very old and used to shelter generals and kings in times of crisis.
The okami, or the mistress of the ryokan, boasted that her inn was the favorite among many famous Japanese, like Soseki Natsume, a contemporary novelist.
Kyoto survived the atomic bomb raid at the end of World War II. I might sound like I was bribed by the Japanese government to write well about Kyoto, which is the opposite of the truth ― I think that Dokdo Islands in the East Sea, which the Japanese call Takeshima, belong to Korea ― but the beauty of Kyoto surpasses such territorial squabbles.
I said previously I can now die happily after seeing Kyoto’s autumnal leaves. But let me take that back.
There is so much to see in Kyoto, and I have promised my Kyoto friends that I’ll buy a small house there and return more frequently to see the city in all its seasonal glory.
There are so many things to enjoy in our short lives, just as Taebe the bell ringer taught us.