Champagne on ice for festive skaters

Champagne on ice for festive skaters

Skaters work their way round the outdoor ice rink in downtown Seoul. [NEWSIS]

If you think you might be the next Kim Yu-na, you don’t want to spend the holidays sat on a sofa eating TV dinners and watching reruns of old movies. Instead, scoot to the nearest rink and skate yourself into the season’s festive spirit.
Few activities are more romantic on a wintry evening than gliding arm in arm across the frozen ice with someone who stokes the fires of your yuletide yearnings. And there are few better ways to bump into someone new, accidentally or with strategic planning, than on the slippery glass-like ice. After all, you have to grab hold of something.
There are several rinks in Seoul and its suburbs, and here’s what you need to know:

Seoul Metropolitan Government Ice Rink
Every winter since 2002 the lawn in front of City Hall transforms into one of the most prominent rinks in Korea. This year the rink is bigger than ever. Last year, the rink was positioned on the right-hand corner of the lawn facing the government building, but this year it is in the center and measures 1,500 square meters. Additionally, unlike last year when there weren’t adequate facilities such as restrooms and waiting areas, this year there’s a 99-square-meter zone where skaters can take a breather off the ice.
Not only that, skating hours have increased from 1 hour up to as much as 2 hours per person.
The best part, though, is the wall of lights that surrounds the rink. Dubbed the “Hi Seoul Lucevista,” the rink is fenced in by a 20-meter-high and 305-meter-round crown of lights. To illuminate the display, 264,000 bulbs are used. The Seoul government is planning next month to display ice sculptures around the ice rink, such as an igloo, slides and an automobile. The public will be able to watch the artists chip away to create their sculptures, and on Christmas Eve and New Year’s Eve, there’ll be fireworks, a hand bell performance and Korean pop artists singing and dancing onstage.
The rink stays open until Feb. 6 and tickets cost 1,000 won ($1.06) for an hour plus helmet and skates.
Lessons cost 10,000 won, but are available only until the end of January.

World Cup Stadium Ice Rink
The Seoul government is also running an outdoor ice rink built in the parking lot across from World Cup Stadium in Sangam.
This rink, which opened last Saturday, is the first in the neighborhood.
The venue is 2,100-square-meters and has lockers, a resting area and seating for those who like to watch.
The World Cup Stadium ice rink, open until Feb. 17, will run free lessons twice a week in January. Classes are limited to 25 people per class. Reservations can be made at the World Cup Stadium Web site at http://worldcuppark.seoul.go.kr.
A two-hour ticket costs 1,000 won, and skate rental is another 1,000 won. For those over 65, tickets and skates are free.

The Olympic Ice Rink
Olympic Park opened its own outdoor ice rink earlier this month. It’s run by Korea Sports Industry, a company financed by the Seoul Olympic Sports Promotion Foundation. The 1,800-square-meter rink is scheduled to be open until Feb 10. This is the second year the park has offered such ice entertainment. The entrance ticket is 1,000 won for an hour. A pair of skates and helmet are provided for free.
For those seeking a higher-end skating experience that is more intimate and personal, the Grand Hyatt Hotel and Seoul Sheraton Grande Walkerhill Hotel have outdoor rinks, and both hotels offer packages and discounts. 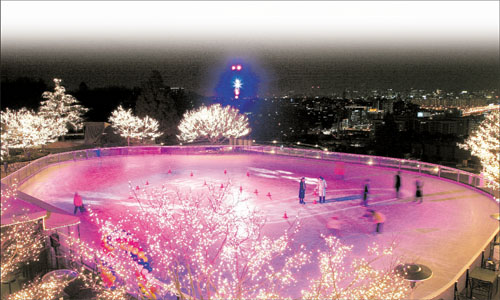 The ice rink at the Hyatt Hotel. [JoongAng Ilbo]


Grand Hyatt Hotel
Although its rink is only 1,000-square-meters, it offers something that the other rinks don’t: breathtaking views of the Seoul skyline at night.
With outdoor tables set around the rink, nonskating friends and family members can enjoy different cuisine from the hotel’s cafeteria. A bowl of udon noodles costs 17,000 won and it’s 10,000 won for a bowl of odeng.
The Hyatt Hotel is offering a special package, appropriately called the “Winter on the Ice Package,” which is available from now until Feb. 29. However, the package isn’t available from Dec. 21 to Christmas Eve, or from Dec. 28 to New Year’s Eve.
There’s also a 187,000 won package, which consists of a one-night stay in one of the hotel’s deluxe rooms along with two free tickets to the hotel’s ice rink, free skate rentals, two pairs of high-quality skating gloves, two free hot chocolates at the ice rink’s cafeteria, a 50 percent discount on lessons, free use of the hotel’s swimming pool and gym, a 50 percent discount on the sauna and a three- hour extension at checkout time.
Another package only available between Dec. 21 and Dec. 24 is the “Christmas Package,” which costs 226,000 won.
It includes a one-night stay in one of the hotel’s grand deluxe rooms, two free tickets to the J.J. Mahoney nightclub (except on Dec. 23), Christmas pudding, a toy rat to mark the Year of the Rat in 2008, a 30 percent discount for two for the hotel’s ice rink, a 50 percent discount on its sauna and free use of the swimming pool and gym.
The Hyatt Hotel is also offering several discounts for ice skating customers.
For couples using the hotel’s rink on Mondays, a 50 percent discount is offered both on the entrance and skate rentals.
On Tuesdays from 5 to 9 p.m. skates are available for free, and on Wednesdays couples will get a free rose and a free Polaroid snapshot.
Families get a 50 percent discount on entrance tickets, and skates are free when more than two members of a family visit the ice from noon to 5 p.m. between Monday and Thursday.
If you’re seriously involved with someone romantically, there are two options for men wishing to skate down on one knee and pop the question.
For 300,000 won, you can propose on the rink with special lighting and musical effects along with a cake and two glasses of Moet Chandon.
That’s Event A; Event B costs 570,000 won and includes everything offered in Event A plus dinner for two at the hotel’s Paris Grill.
A flower bouquet during the proposal requires an additional 77,000 won.
For those who wish to simply skate, tickets cost 18,000 won for two hours on weekdays and 21,000 won on weekends. Rental skates cost 13,000 won.
Additionally, a 50 percent discount is shaved off entrance tickets for SK Telecom subscribers.

Seoul Sheraton Grande Walkerhill
The hotel along the upper banks of the Han River has a 1,800-square-meter rink, and this year’s ice event is called “The Snowman’s Wonderland.”
Other entertainment includes a photo zone, where skaters can take pictures of themselves with a sleigh pulled by a Siberian Husky, and ice carving and snowmen making competitions.
The hotel says it will manufacture an abundance of artificial snow to keep the mood festive.
There’ll be a Countdown Party on New Year’s Eve, a Fire Show on the rink and a Kiss and Hug Time on New Year’s Day plus a lottery and fireworks.
The New Year’s Eve bash kicks off at 10 p.m. and lasts until 1:30 a.m. Skate rental, cocoa or coffee as well as sparklers will set you back 60,000 won.
The hotel also offers a marriage proposal program for seriously involved lovebirds. Event A, for a cool 1.4 million won, offers an hour on the rink and free skate rentals for two, a special music and light show, a chance to make a speech, candles and flowers.
Event B, for a whopping 1.7 million won, includes all of Event A’s bits and pieces plus champagne, warm shawls and two brunch coupons at the restaurant’s kitchen. The ice rink will be open until Feb. 17.
Entrance including 10 percent tax is 20,000 won on weekdays and 30,000 won on the weekends and holidays. Skate rental is 12,000 won.
A 30-minute lesson plus a 90-minute practice session costs 55,000 won per person.
Groups of two to three people get a discount of 50,000 won.