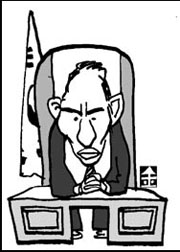 Franklin D. Roosevelt won four presidential elections in a row, more than any other president in American history.
He led the country for 12 years, guiding it through the Great Depression and World War II, and making the country into a superpower.
That man, however, did his work in a wheelchair due to infantile paralysis that struck him at the age of 39. In an inauguration ceremony in 1933, Roosevelt said, “The only thing we have to fear is fear itself.” He pushed forward the New Deal policy under the three-R vision: rescue, recovery and reform. In the second presidential election in 1936, Roosevelt won a landslide victory by 1.1 million votes over the Republican candidate.
Many historians say that the secret of his success lay in his open-mindedness and willingness to listen to people from different walks of life.
Indeed, Roosevelt became the first U.S. president to select a female cabinet member. Jesse Jones, his political enemy who once worked with Roosevelt as head of the Commerce Department, said Roosevelt was a hypocrite who lacked personality, but he could not help but like him.
However, in this age of globalization and information, the whole idea of leadership has taken a different meaning.
Jack Welch, the former CEO of General Electronics, defined his role as a leader as someone who could select the right person for the right position, distribute money where needed and disseminate ideas to every area at the speed of light.
Recently the term “network leadership” has become popular. It means that a leader must have the ability to network, which means being able to attract and motivate diverse parties.
Nonetheless, the fact that people are the first priority for leaders remains unchanged in this age, in which there is a wealth of leadership ideas.
At the close of its 17th presidential election, Korea is experiencing a new opportunity to change its leadership. Korea’s economy has been stalled for more than a decade at the threshold of becoming a developed one and has started to lose confidence.
Former President Kim Young-sam used to say during his term in office that personnel affairs were everything.
Nevertheless, many previous presidents have been criticized for appointing people on the basis of relationships, regional ties or common interests.
The first step to great leadership seems to be a difficult one.