Fish vendor has a big heart

Fish vendor has a big heart 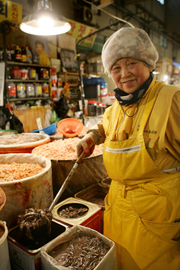 “Mrs. Yellow” has a small store that funds big dreams. By Kang Uk-hyun

In her yellow rubber apron and floral-patterned wool cap, she is an institution at Seoul’s largest fish market.
Best known as “Mrs. Yellow” because of the bright apron she wears, she sells all sorts of salted fish. But there is more to this lady than meets the eye.
Yoo Yang-seon is also a Korean hero.
She may not equal Bill Gates or Ted Turner in terms of financial clout, but her heart is just as big.
Yoo owns a 356-square-foot store in Noryangjin Fish Market in southwestern Seoul.
From the money she earns, Yoo, 75, sends donations, mainly in the form of books and scholarships, to schools and orphanages. Since 1983 she has donated 1.5 billion won ($1.6 million).
This generosity grew out of a grudge in her heart.
Growing up in a traditional patriarchal family, Yoo was told by her father that women are inferior to men and that wives should obey their husbands ― no matter what. 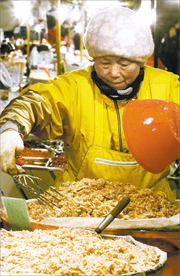 “Mrs. Yellow,” or Yoo Yang-seon at the Noryangjin Fish Market. By Kang Uk-hyun

she regrets not getting a formal education.
Her hardships continued even at age 26, when her marriage was arranged with a neighbor family’s eldest son, who owned 30 acres of rice fields.
Yoo was constantly abused by her husband and his family for being sterile.
The family head kept a concubine to carry on the family line, and she later gave birth to a child. Yoo was considered a burden to the family.
Several months later, though, Yoo received a gift ― an anonymous person left a baby girl wrapped in swaddling clothes in front of her house with a letter requesting that whomever found her raise the child.
“It was like a gift from heaven,” Yoo said. “All I could think of was to raise and educate the child and pay off my past grudges of not being able to give birth and being uneducated.”
Meanwhile, her husband was selling salted fish at Noryangjin Fish Market with his concubine.
When the winter season of making kimchi came to an end, Yoo took over the store. She paid her husband 200,000 won which she earned by doing part-time needlework.
With an unbreakable will to work, Yoo labored 18 hours a day. That working schedule continues to this day.
“She is thrifty and saves,” said Yoo Seon-ok, Yoo’s seventh niece. Her monthly gas fee does not exceed 920 won. She’s been wearing the same shoes for seven years. Instead of turning on the lights at her home, she depends on the streetlights.
“No one can match her frugality,” Yoo Seon-ok said, noting how she uses cut-up pieces from daily calendars as tissues.
“She reuses paper cups until the paper is worn out,” her niece said.
With that diligence and tenacity, Yoo squirreled away money and started making donations.
The cash flow at the store benefits from its convenient corner location, making it easy for many customers to stop by.
“Salted fish, especially pickled shrimp, is one of the main ingredients to make kimchi. Extended families used to prepare 200 to 300 cabbages for kimchi,” Yoo said. 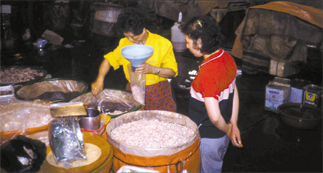 Over the years, Yoo’s frugality allowed her to save and eventually buy land.
She bought land near Seoul and gradually moved into a four-story building in Gwangmyeong City.
When Yook took out a loan at her bank, one of the executives gave her the idea of becoming a benefactor.
“At the bank I met an executive who helped an orphanage community in Uijeongbu,” Yoo said. “With his invitation I visited the community and met many children who were in need of books.
“The pursuit of learning lies in books,” she said. “Justice, order, morality, knowledge and truth ― everything is in books.”
At 60 Yoo divorced her husband and concentrated on supporting the many students in need of educational materials.
In 1998, she donated a building valued at 1 billion won to Hanseo University in Chungcheong Province, where she was born.
Last year, she donated her land in Jeju Island to the university as well. Now she is the director of the Hanseo Scholarship Foundation.
“We want to thank Yoo for her donations,” said Park Myung-rho, chief of Hanseo Student Affairs.
To show its appreciation Hanseo establish a scholarship in Yoo’s name.
“Since 1999, the school has been giving out scholarships to students with a high grade point average and those in need of educational expenses,” Park said.
This year the university shared the scholarship donated by Yoo with seven nearby high schools, including Seoryeong High School, Seosan Girls’ High School and Taean High School.
“Each student received 500,000 won,” Park said.
Yoo said there is joy in giving.
“I give but receive at the same time ― the beauty and charm of sharing lies there,” Yoo said. She received some 10,000 letters from scholarship recipients.
Back at the market, her sales of salted fish have increased as well.
“I may as well buy products from Yoo,” said a customer asking for one kilogram of pickled octopus. “The money I pay will be used helping those in need.”
But not everyone is happy. Neighboring stores that sell the same products are worried that they will lose customers.
“When Yoo receives 100 customers, we each receive only one,” a neighbor competitor said. “Ever since Yoo appeared in various media, we have had a dramatic decrease in sales.”
Yoo, however, isn’t fussy. She referred to a Korean idiom: “You feel jealous of a neighbor’s success.”
Meanwhile, Yoo says her vision is to build a university in Seosan, Chungcheong Province. She hopes it becomes as prestigious as Harvard and provides free education.
Until that day, customers will continue to see Yoo in her yellow aprons, busy selling salted fish at Noryangjin Fish Market.

Big donors know the joy of giving has eternal value 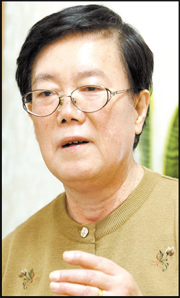 Give to get?
Donating may seem difficult for some, but for others, it seems to come naturally. Yoo Yang-seon isn’t the only one who knows the secret of cheerful giving (see above story).
Lee Soon-duk, 80, is another big giver. She donated all of her assets to Konkuk University when she found out that she has Parkinson’s disease.
She saved money for 30 years by selling cigarettes in front of the university. She also sold her cigarette store in Hwayang-dong. When she learned her diagnosis, donation was the first thing that came to her mind.
“When managing the store, I’ve seen many clever students,” Lee said. “Some lacked money so they could not resume the upcoming semester.”

During her life Lee has saved about 200 million won ($213,000), with the intention of helping two younger sisters in Hwanghae Island in North Korea.
But she says, “Will unification ever take place? I have a disease and there is no time and hope.”
With no other family than her two sisters, Lee didn’t face any family conflict regarding inheritance.
“It would have been more difficult if I had a family to look after,” Lee said.
“I would like to be remembered as a tree that shares unsparingly,” Lee said.
Lee Soon-rae, 84, is another donor who contributed some 1 billion won worth of real estate to Chonnam National University. She has six grown children that she raised.
When Lee told her sons and daughters that she would leave no inheritance and contribute it all to society, they agreed.
“I gave birth to eight children but two of them died when young,” Lee said. “It’s money I saved that would have been used to raise them.”