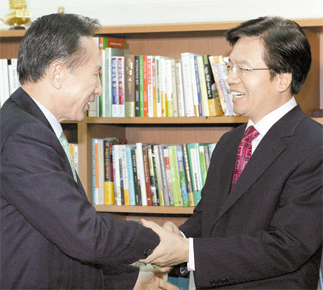 Living up to his nickname “bulldozer,” President-elect Lee Myung-bak kept to an aggressive diplomatic schedule yesterday, practicing what he calls “pragmatic diplomacy” with South Korea’s key allies and neighbors.
Lee’s tightly packed morning began with a telephone conversation with UN Secretary-General Ban Ki-moon at 9:35 a.m. A short time later, Lee was visited by Russian Ambassador Gleb Ivashentsov.
During their meeting, Lee expressed strong interest in a joint energy development project in Russia using North Korean workers. “It would be beneficial for both countries if Russia and South Korea work together to develop East Siberia,” Lee said. “I want this project to start in the early stage of my term. We can take advantage of North Korean labor.”
Ivashentsov also delivered a congratulatory letter to Lee from Russian President Vladimir Putin.
After the Russian envoy, Lee spoke to Japanese Prime Minister Yasuo Fukuda for nine minutes on the phone. The two leaders promised to strengthen bilateral ties and to cooperate on the North Korean nuclear crisis, according to a transcript provided by the Grand National Party.
Lee was then visited by China’s ambassador to Korea, Ning Fukui. Ning delivered Chinese President Hu Jintao’s letter of congratulations expressing hope for closer relations between Seoul and Beijing.
“China is South Korea’s largest trading partner,” Lee replied. “South Korea-China relations are very important.”
By meeting Beijing’s top envoy, Lee completed his introductory talks with the four regional powers within about 24 hours of officially becoming president-elect.
Lee obtained his official certificate of presidential victory from the National Election Commission on Thursday at 10:20 a.m. He met with the U.S. and Japanese ambassadors that afternoon. 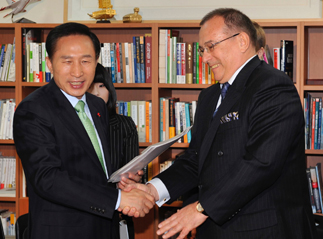 Lee also spoke with U.S. President George W. Bush on Thursday night. “Koreans traditionally have high respect for ties with the United States,” Lee was quoted as telling Bush in a transcript made available by the Grand National Party. “By strengthening ties, I promise to cooperate in maintaining peace in Northeast Asia and making the North give up its nuclear programs.”
Bush invited Lee to visit the United States as soon as possible after his inauguration, and Lee said he would.
Observers noted that Lee’s diplomatic offensive was rapid. After his election on Dec. 19, 2002, Roh Moo-hyun finished meeting with ambassadors of the four powers on Dec. 24.
While Lee is familiar to international business leaders, he is less well-known in diplomatic circles. Park Jin, head of the Grand National Party’s international relations committee, however, said Lee is a quick learner. “He is focused with the ability to make diplomatic decisions,” Park said. “Lee will have no difficulty building a network with world leaders.”