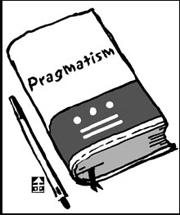 The word pragmatism comes from the Greek term “pragma,” which means an action or execution. It is a philosophy that values action and practice above everything else. It uses utility as the sole yardstick for judgement of truth. Knowledge is also regarded as a useful tool to promote the prosperity of humankind.
There is a close correlation between pragmatism and contemporary America. Pragmatism is nearly the only philosophy that the United States follows.
Pragmatism is deeply rooted in the utilitarianism that prevailed in Europe at the end of 19th century. At that time, European capitalism was faced with an extreme income gap between the haves and have-nots, as well as an intense labor movement. The bourgeoisie needed a new ideology to stand against the proletariat, which was moving toward socialism. The solution was the utilitarianism that advocated the famous phrase, “the greatest happiness for the greatest number.”
Pragmatism is often called the evolution of utilitarianism from an American perspective. The Metaphysical Club, a philosophy group founded in January 1872 in Cambridge, Massachusetts, was led by four intellectuals ― Supreme Court Justice Oliver Wendell Holmes, Jr., psychologist William James, semiologist Charles Sanders Peirce and educator/philosopher John Dewey. “The Metaphysical Club,” a book written by Louis Menand, explained that American pragmatism was born here, even though the club was disbanded after nine months.
The intellectuals shared the belief that ideology is not something that waits to be discovered, but can be a tool to cope with the world, like a fork or a knife.
Korean philosopher Tak Sok-san said in a lecture, “Pragmatism has been misunderstood as a political term that puts a priority on the people’s prosperity and well-being, but it is the philosophy that Korean people have pursued during all of the last century.”
He also said, “As the need arose, pragmatism has served as a useful ideological frame. It has helped Koreans decide what they needed most to be successful, in terms of resolving the impending tasks they faced as the nation experienced industrialization and democratization during the past six decades.”
As President-elect Lee Myung-bak advocates a pragmatic government, practicality is emerging as the new spirit of our times. It is our sincere hope that he will not use the term pragmatism as mere rhetoric. We hope he makes sure that the pragmatism is accomplished with practical policies in a practical manner.