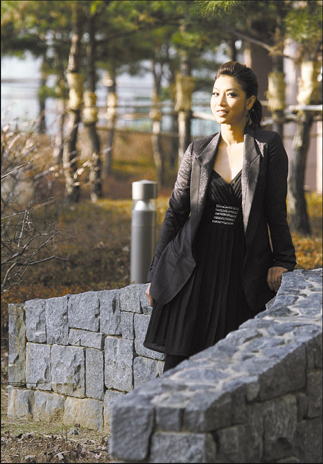 Musical theater star Lee So-jung has brought out an album and her life story. By Kang Uk-hyun

As Lee So-jung steps out of a cab on a wintry December day, the traffic seems to slow around her.
Her impossibly pointed heels hit the pavement and she pulls her coat around her shoulders with the assured movement of a woman who knows people are watching.
Her stylist struggles out of the taxi behind her, arms overloaded with bulging bags.
Lee has good reason to be confident ― her career is a sure source of envy for other actors and actresses.
She was an overnight sensation in the United States when she became the first Korean to land the title role in a Broadway show.
She played Kim in “Miss Saigon” in the 1990s.
Now, with the release of “The Sound of Dream,” a book and CD set, she’s pursuing a career as a solo performer and writer.
It’s something she’s been meaning to do for a long time, she said, settling down in a Yongsan restaurant.
“Singing is a choice that God made for me,” she said.
Despite this sense of divine purpose, her first steps into the world of music were not in front of a mic.
“My mother brought me up to be a pianist, just like all Korean parents,” she said. “I was jealous of kids who would bang away on the piano in kindergarten, so it kind of started from there.”
But the instrument failed to capture her heart. “The piano is too much like hard work. I knew from the beginning that I wanted to be a singer.”
Even though she didn’t take singing lessons until college, she doesn’t think her talent is hereditary. 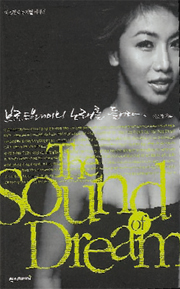 “There’s no one musical in my family,” she said. “My mom was a dancer, but like many Korean women of her era, she dropped her career when she married my father.”
Unlike many performers, Lee didn’t spend years toiling away waiting for a big break.
“I was just an amateur singer, and then all of a sudden I was a professional,” she said.
The Miss Saigon production needed Asian performers and Lee attended auditions in Hawaii. She earned a callback in Los Angeles, and flew out, not knowing if she would land a role.
But she did well enough to make the final auditions in New York, and this time the flight was on the house.
“I later got a call from the casting director, Vincent Liff. That was in September of 1994. He said, ‘Are you ready for this news?’ And I said, ‘Are you sure you’re calling the right person? Don’t give me this news if I’m the wrong person!’” Lee said.
After Miss Saigon, she sang soundtracks for a series of TV shows. She also worked for Disney, as the singing voice of Mulan, in the Korean-language animation of the same name, and Princess Jasmine in the Korean-language “Aladdin.”
She was invited to perform at President Kim Dae-jung’s inauguration party, and starred in a number of musicals in Korea.
Along with a smoldering desire to pursue a solo singing career, Lee wants to revive her initial American success.
“Singing in Korea means so much to me, but the U.S. means just as much because that’s where I started,” she said.
“But the American market is cautious about signing Asian performers. There hasn’t been a successful one yet. Asian performers they’ve seen didn’t bring anything new to the U.S.,” she said.
But she believes that her approach gives her an edge. “My interpretation of songs is different. Because I come from a musical background, I focus on the lyrics and delivery,” she said.
Lee began writing The Sound of Dream in May, and it hit stores two weeks ago with an accompanying CD. The album consists of songs by Rodgers and Hammerstein, Broadway legends who Lee said have inspired her during her career.
The book is made up of three intertwined stories: Lee’s own life, the lives of Rodgers and Hammerstein and the making of the 1965 movie “The Sound of Music.”
“It’s a book about pursuing your dreams,” she said.
Lee’s desire to go back to the States may have something to do with her views on Korean musicals.
“[The Korean musical scene] developed in such a short time that something is missing. Musicals are not just about clapping your hands and having fun,” she said.