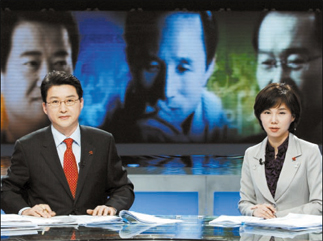 Many TV shows sang hymns for the president-elect on the night of the election last week.

I’m not a big fan of waiting, but last Wednesday was an exception. I was happy to line up to cast my vote at the polling station in the presidential elections. If everything goes as planned, I’ll get married, buy a house and have babies within the next five (or 10) years, so this president means a lot to me.
Waiting my turn at the polling station, I was delighted to see that I wasn’t the only one there to vote for the new president.
From an elderly couple who had to use a magnifying glass to read the ballot paper to a young couple mulling over which movie they should see after making their choices, the polling station was filled with festivities.
It’s true that voter turnout hit a historic low this year, but I have to defend my friends who refused to vote. They were demonstrating their frustration with the quality of the candidates.
In fact, many people I know are unhappy with the election result, which has been pretty much a forgone conclusion for weeks, despite recent scandals.
And those sad sighs from some TV networks were only to be expected. I must say that I am full of praise for those shows that spotlighted these scandals of the presidential candidates.
Still, the special programs that the major three TV networks broadcast after the election were simply hymns for the president-elect.
As a tax-paying citizen who both loves and at times loathes aspects of this country, I was hugely interested in the election outcome.
So I watched KBS-TV, MBC-TV and SBS-TV deep into the night on election day, and I was surprised (in a bad way) that these three major networks seemed to be singing the praises of President-elect Lee Myung-bak. The next day’s newspapers ran similar positive stories, especially those publications that had written furtively pro-Lee editorials.
TV programs have a bigger impact on the voters, because people can watch while working or eating, and these days people often have less time for perusing newspapers.
But, worryingly, the election TV shows about the rags-to riches story behind the president-elect were a huge disappointment.
Each TV station aired documentaries with titles that included words like “myth” or “success,” And SBS-TV looked ― and I’m sorry to use this word but I have no choice ― pathetic. The anchors interviewed a group of citizens offering their best wishes for the president-elect, which were printed onto an engraving with the cannot-be-missed SBS-TV logo. The anchors later delivered it to Lee, saying that they wanted it to be hung in Lee’s office, a request that forced a a bitter smile onto my lips.
The documentaries and specials about Lee’s success were well produced, so I’m sure most viewers believe now that the president-elect is almost a saint.
But such praise is like a hymn to South Korea’s Dear Leader Lee.
Some TV shows on KBS-TV and MBC-TV, which reported the Lee bribery scandal in detail, remained silent after the election, and they didn’t rah-rah for Lee, thank God.
I guess it’s understandable that people want to feel assured of their electoral choices, but the media has a duty to remain objective about the president-elect.
Watching footage of the Taean oil spill on Monday, I wanted to scream, “Where is the president of this country?” just like Peter Jennings did on air when the planes hit the twin towers in New York on Sept. 11. I later found out President-elect Lee played tennis that day and had donned a Santa Claus outfit for children. So he had reasons for his no-show.
Still, it would have been much better for the media to have broadcast stories about Lee on the beaches wearing rubber gloves stained with oil. That image would have been far more fitting that the memory of the SBS-TV logo getting hand-delivered to Lee’s offices.
sujiney@joongang.co.kr