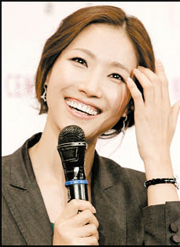 If the story above is any proof, celebrity marriages can get dangerous. Nevertheless, fashion model Lee Sun-jin is undeterred. Lee announced last week she will walk down the aisle next month with her former agent, Kim Seong-tae.
Lee confessed that “2,000 days” ― or six years ― have passed since the couple embarked on their serious relationship. Lee has pursued a moderately successful modeling career since she won a supermodel competition in the 1990s.
In high heels, Lee is a little taller than her husband-to-be so she was rather puzzled when Kim made a surprise visit to one of her recent press conferences for a photo opportunity.
“I didn’t know that he would be here, so I had my high heels on,” Lee said. Still, the couple posed for the flashbulbs with couldn’t-be-happier smiles.
Kim said in the press conference that she and her fiance had dated in secret just in case the rumors would ruin their careers.
“I have become quite a good actor,” Kim said, smiling. Kim was Lee’s agent in her early career, and is now pursuing a different business.
“I apologize for having to lie, but I hope people understand and bless us now,” Lee said.
By Chun Su-jin