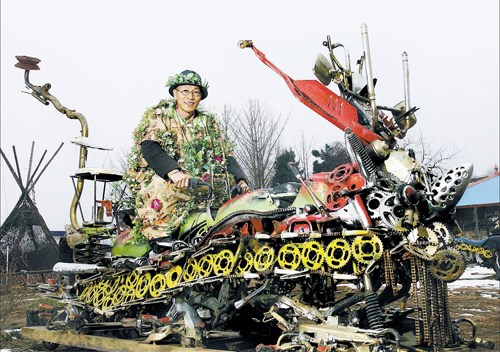 Artist and campaigning environmentalist Lee Hwan sits atop one of his installations, built out of material thrown out by consumers. By Kang Uk-hyun

YANGPYEONG, Gyeonggi ― The air held a hostile chill and snow was falling the day I met environmentalist and artist Lee Hwan.
It wasn’t the heavy, watery mix that had fallen a few days before but the light, fluffy kind. A layer began to cover the roof of Lee’s museum in Yangpyeong, Gyeonggi, where we had arranged to meet.
“Come in. Wow, it’s finally freezing up outside. Isn’t it great?” Lee beckoned from inside the cafe he’d designed inside a disused railway carriage.
Lee has just wrapped up a large-scale exhibition in Yeouido, Seoul, titled “The Green Ark,” which featured a giant 36.5-meter-long, 6.5-meter-deep ark in the middle of the business and commercial district.
The ark, which was supported by the Ministry of Environment, was built out of recycled material including pipes, farm tools, old tires and even an abandoned motorcycle.
“There’s an obvious pun to this work [the green ark] regarding Noah’s ark. I built it as a warning, to make people appreciate the risks of climate change,” he said.
Lee’s aim was to build a structure so massive that its sheer size would ram home the message that climate change is indeed a weighty issue.
Unless you have been living down a mineshaft for the last decade, global warming is the biggest threat facing this planet, one that will not go away and which too many countries are doing too little to solve.
United Nations Secretary General Ban Ki-moon said recently that climate change poses as big a threat as war, and during this month’s climate change conference in Bali, Ban called the issue “the moral challenge of our generation.”
Many experts say that unless there is firm government action from around the world, the problem cannot be solved, leading to disastrous results.
“Leading countries including the United States, as well as Korea, aren’t taking aggressive enough measures to fight global warming,” said Ahn Jun-gwan, a manager at the nature conservation department at the Korean Federation for Environmental Movement.
Ahn, who spoke at the Bali conference, added, “It’s developing countries that are affected the most from the diseases and natural disasters that are brought on by climate change.”
Delegates from around the world went to the Indonesian resort island to work on a road map of action to replace the 1997 Kyoto protocol, which expires in 2012.
During the conference, the U.S. faced angry criticism from other countries.
“President Bush has argued that the cuts required by the Kyoto protocol would hurt the U.S economy, but other countries have been fighting this position, urging the U.S. to set an example and take responsibility,”Ahn said.
The U.S. is the world’s biggest polluter.
Ahn said Korea was also failing to take a more proactive role. Even with mounting scientific evidence that the release of carbon dioxide and other heat-trapping gases play a key role in the rise of the surface temperature of the earth, Korea in 2005 emitted 591.1 million tons of greenhouse gases, making it sixth among OECD countries.
On the Korean Peninsula, the number of volatile typhoons and guerrilla-type heavy rain has increased more than threefold in the last decade. In addition, 2,127 people have died as a result of heat waves and the number of patients dying from malaria reached 2,051 in 2006, compared to just five in 1994.
With a sudden rise in natural disasters and diseases, the environmental ministry created an emergency energy and climate department in March.
“Korea has not been doing its part to raise awareness of this urgent problem,” said Lee Jeong-hoon, head of the energy and climate department. “In terms of level of awareness and action taken against environmental damage, Korea is like the U.S. in the late 1990s. This is a major problem.”
Lee Hwan said that popular figures like former U.S. Vice President Al Gore, who received the 2007 Nobel Peace Prize in October for his efforts against global warming, underlined the importance of raising public awareness. “It’s such a commercial, digitalized world. People listen to cultural figures who they look up to and respect. With more celebrities and political figures paying more attention to the environment, many others will follow.”
It’s easy for individuals to play their part, and taking immediate action is urged since damage control now is better than cleaning up later, he added.
“There is no secret and the keys words are ‘save energy,’” Ahn said. “Use things longer, recycle things that are recyclable, turn off the water when you aren’t using it, unplug cords which are not being used and most importantly, don’t think these resources will last forever, because even today there isn’t enough to go around,” Ahn said.

Lee Hwan said that it was ironic that the very technology that is making us live longer might not help us save the planet.
“It’s funny that with advancements in medicine and technology, life expectancy for children born today could rise to 100 years of age in the future, but the Earth, if the damage continues unabated, will not last.”
Lee was scathing about the way many people take so many aspects of modern life for granted.
“A person needs just one car, and if you’re living in Seoul, you don’t even need one. I wish that more people would use public transportation and save energy,” he said.
Modern-day consumerism is also a blight, he said. “If you go through your house right now, I bet you’ll find many, many things that you no longer use or need. Think hard about why you bought them in the first place. I bet you that eight or nine times out of 10, you bought them for the sake of buying something,” he said.
The proof of the problem is in the data. “Statistics are statistics, and you don’t have to memorize the numbers, but try to remember figures like ‘96 percent increase of CO2 levels over 10 years’ because they’re not made up. You can ignore the data, but the problem’s still not going to go away.”
Lee stepped out of the train cafe to show me his museum ― the Environmental Restoration Museum (031-772-7978), which he built in 1999 in a vacant factory.
“When I started out as an installation artist, it was very costly to keep buying stuff for my pieces. So I began collecting things that had been thrown away ― televisions, car parts, clothes, furniture, etc. I realized that people threw away perfectly usable items. The museum represents this mentality on a grander scale. When I heard about an abandoned factory that was in perfectly good condition, I had to do something about it,” he said.
To the outsider, the installations look like scattered rubbish ― tin cans, automobile parts and plastic glued together to make abstract sculptures, robots and other figures.
To Lee Hwan, however, the museum is his castle of pride. “Through my art, I want children to get a sense that you don’t constantly need new things to have fun, and that taking care of things you already have can be just as meaningful.”
Lee Hwan is planning to tour Korea with the “Green Ark” and hold exhibitions about climate change. 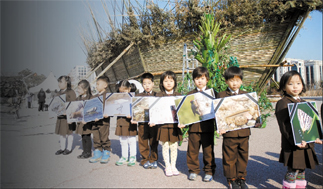 Kids in front of the “Green Ark” in Yeouido, central Seoul, hold a mock funeral for extinct species. Provided by Lee Hwan

The Ministry of the Environment has listed a number of phenomena taking place as a result of climate change on the Korean Peninsula.

A warmer Korean Peninsula
The temperature rises in Korea are twice the global average. For the past 100 years, there has been a 1.5 degrees Celsius rise in temperature here.

Natural disasters
240 Koreans died as a result of typhoons Luca and Maemi in 2002 and 2003, and an estimated 10 trillion won ($10.6 billion) worth of damage has been caused by natural disasters.

A warmer East Sea
The rise in water temperature in the East Sea (Sea of Japan) is three times that of the world average of 0.5 degrees Celsius. Winters are shorter, but spring and summer are longer. In fact, winter was 30 days shorter in the 1990s compared to the 1920s; spring and summer are 20 days longer.

More yellow dust
The number of days affected by the yellow dust that sweeps over Korea from China in spring was 3.9 in the 1980s, but after 2000 the average is 12.4 days.

Heat wave fatalities
From 1994 to 2005, 2,127 people in Korea died in Seoul, Daegu, Incheon and Gwangju from heat exhaustion.

Loss of habitat and species
Because of the rise in water temperature, the Alaskan pollack, the most common fish in Korea, is disappearing from Korean seas; the number of warm current fish including anchovies, flatfish and mackerels is increasing.